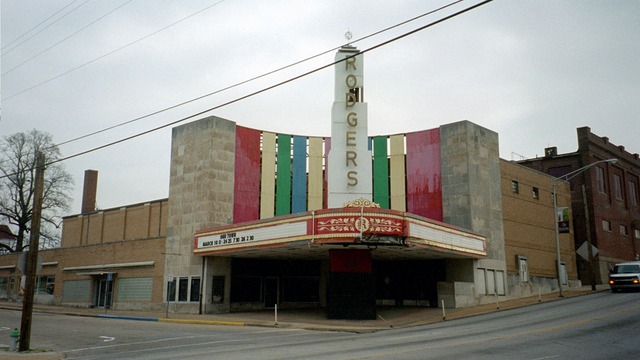 The Rodgers Theatre was opened in 1949 and is a great example of late-Art Moderne architecture.

It was built for I.W. Rodgers, who opened his first theater in Poplar Bluff in 1914, eventually acquiring almost all of the theaters in town.

The Rodgers Theatre had 1,160 ‘Bodyform’ seats in its auditorium, a balcony, and a crying room, which had a soundproof glass window which allowed mothers to still view the movie.

Early advertisements for the Rodgers Theatre made much of the fact that it was air-conditioned and heated, and was hailed as the most modern theatre between Saint Louis and Memphis when it opened.

Its front doors were made of solid walnut, and the circular shaped main lobby contained leather benches and a concession stand. Staircases led up to the balcony and down to the restrooms.

Also as part of the Rodgers Building, there was a dime store on the main floor and offices above the theater.

The Rodgers Theatre marquee was illuminated by neon lighting, and contained a tower with the name of the theater in large red letters, as well as multicolored panels behind the tower.

The first film shown at the Rodgers Theatre was “Red Canyon” with George Brent and Ann Blyth. Close to 2,000 people attended the opening day festivities, including the mayor of Pine Bluff, who cut the ribbon and purchased the first ticket.

In the ensuing years, the ticket booth was closed, and the theatre was divided into two screens.

The theatre was sold by the Rodgers family to the Kerasotes chain in 1966, which continued to operate the theatre until it was closed in 1999, due to the chain’s opening a new multiplex theatre nearby. On July 19, 2001 the Rogers Theatre was added to the National Register of Historic Places.

After closing the Rodgers Theatre, Kerasotes donated the theatre to Butler County. Since 2007, the Rodgers Theatre has hosted ocassional live concerts with proceeds going to the theatre’s ongoing restoration. County offices are now located in the former theatre office space on the second floor.

Here is an interesting article about the Rodgers:
http://tinyurl.com/p7bed

CW Rodgers was president of Rodgers Theaters Inc. in 1963. Rodgers also operated the Ritz and Starvue Drive-In in Blytheville, AR, the Anna Drive-In and Rodgers in Anna, IL, the Gem in Cairo, IL, the Varsity in Carbondale, IL as well as the Poplar Bluff Drive-In in Missouri.

They are listed as a 501(3)C Non-Profit. I am so exciting and honored to be the webmaster. I remember going to the Rodgers as a teen! I will post a link to the site when it is running!

I am happy to post that we have a site up for the Rodgers!

If you would like to register for News & Events:
View link