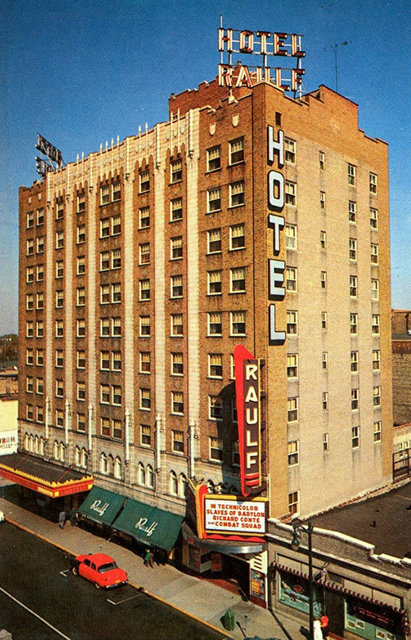 The Fischer’s Theatre was opened on November 23, 1927 with the world premiere of “On Your Toes” starring Reginald Denny. It was built and operated by Fisher-Paramount Theatres. ‘Singing’ organist Harry Wagner played the Barton organ. On June 13, 1929 it was renamed Strand Theatre and was later taken over by Standard Theaters Management Corp. It was renamed Raulf Theatre in December 1952 under Marcus Theatres, and was finally renamed Plaza Theatre in 1968.

With but a few days remaining before the opening of the beautiful new Fischer theater, officials of the Raulf company, the architectural firm and the theatrical company paid a visit to Oshkosh Thursday, to arrange the final details. Included in the party were Charles Raulf, Frank Fischer and Clarence Keller.

They declared that the progress on the theater had been even more rapid than they had expected and that there is not the slightest doubt as to the theater opening at the scheduled time.
So sure are the workmen, employed in putting in the finishing details at the building, that thousands of dollars have been wagered by them that tne theater will be completed in time for the formal opening.

Mr. Fischer declared that arrangements have been made with Carl Laemmle, former Oshkosh man, now head of the Universal Pictures corporation, so that a picture just being completed at Universal City will be rushed to Oshkosh for the opening. The picture, he stated, is now in the cutting room at the studio and will be sent to Milwaukee by airplane, arriving there Monday. It will be exhibited in no other city prior to its showing in Oshkosh, and, in fact, will be seen here thirty days before it is released to any other theater, he declared. This was made possible only because of Mr. Laemmle’s interest in his “old home town.”

Work on the interior of the theater is being pushed rapidly and already the show house has taken on the beautiful appearance that will greet the theatergoers at the opening next Wednesday.

The placing of the seats is also being accomplished in a rapid manner. While much is to be done before the doors will be thrown open Wednesday, day and evening shifts will work every day until next week.

The interior throughout promises to be one of beauty and attractive with its brilliant coloring and atmospheric effects, and Oshkosh citizens are looking forward to the opportunity of visiting the new motion picture palace with a considerable amount of interest.

The style of the theater was Spanish-Atmospheric.

We need to find a modern address for the Plaza Theatre. Oshkosh renumbered the lots on Main Street in 1957, and the former 200 block became the modern 500 block. The address of The Magnet, a billiard parlor across the street from the former entrance of The Plaza, is 519 N. Main. The address of Mainview Apartments, which appears the be the former entrance to the Raulf Hotel, is 530 N. Main. I would guess that the theater entrance, which was at the south end of the hotel’s frontage, was approximately at modern address 518 N. Main.

Street View needs to be reset, too. It currently shows the Time Theatre, in the modern 400 block of Main Street.

A website on downtown Oshkosh states that is became the Strand in 1930,Raulf 1953 and Plaza 1968 and was demolished in 1979.The site is now occupied by Mainview Apartments.

I don’t think the auditorium building was actually demolished. It appears to have been gutted and filled with floors, and windows were punched in the side walls. If you move Street View three clicks south, you can see the side of the building across the parking lot. Even the stage house is still standing.

The June 13th, 1929 grand opening ad as Strand can be found in the photo section for this cinema.