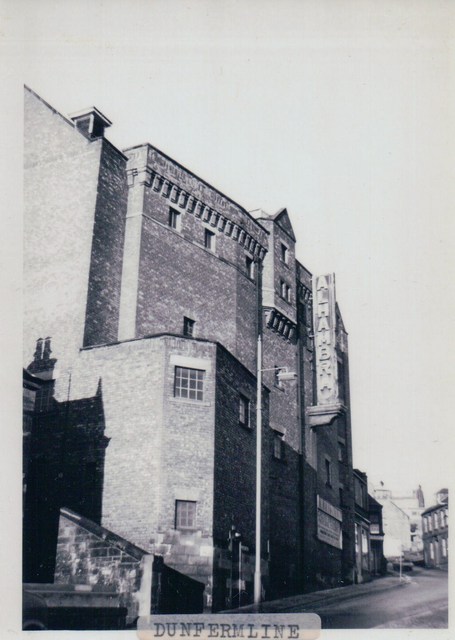 The Alhambra Theatre was built in 1922 as a theatre, became a cinema in the 1930’s, operated by the Thomas Ormiston chain. Later taken over by the J.N.Milne Theatres chain, this continued until the mid-1960’s. It was then converted into a bingo club and this lasted for 40 years.

It is a large theatre, holding 1,700, and is built on an extremely sloping site with the foyer at the top of the slope.

Work began in 2007 to restore and re-open the building as a live theatre/performance venue. The Alhambra Theatre was re-opened in 2008 as a venue for music and comedy performances. Film returned from 3rd March 2011, when “The Kings Speech” became the first film to be screened in the building for over 40 years.

In 1991, Historic Scotland designated the Alhambra Cinema a Grade B Listed building.

I have a photograph of this cinema,but not as cinema and there is scaffolding around it, any use?

Looks like the Alhambra’s days could be numbered as carlton have commenced work of a 2000 seat purpose-built leisure club in Dunfermline. Hope the locals press the council to do something to retain the Alhambra as a theatre/cinema venue or something in that vein.

The Alhambra Theatre opened on 22nd August 1922. It was built as a theatre with full stage facilites, but had provision to show films as well.

In 1931 a new crush hall was added to serve the seperate entrance to the pit and stalls. It had a seating capacity of 1,700.

It closed as a cinema in the mid-1960’s and become a bingo club.

Good news – after the bingo company moved out, The Alhambra has been purchased by developers who hope to restore and re-open the building as a live theatre by the end of 2008. The project is being overseen by a former director of the Edinburgh Fringe Festival. There is going to be an open day on December 1st 2007. Further news on the theatre’s new website here:

Photos of the superb Alhambra Theatre taken in October 2011:–

I think the final paragraph in the main description about being on the Buildings at Risk register needs amending.