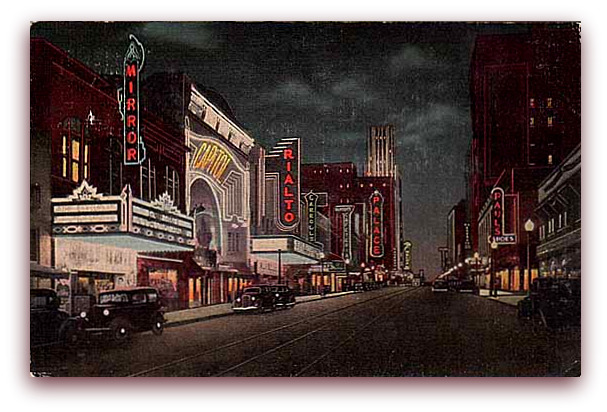 The Capitol Theater specialized in Saturday westerns and serials. Popular during its hey-day, with the arrival of television, the old show house closed in 1956 and was torn down during the 1960’s.

From 1933, a postcard view of the Capitol Theater on Elm Street in Dallas along with the Mirror, Old Mill and Palace.

From the 1930s a postcard view of the Capitol Theater on Theater Row in Dallas.

The exterior is very impressive. Sure wish someone could post some interior shots. I can’t imagine the style is “unknown”.

kathy, if you can get a copy of Jeanette Crumpler’s book about Dallas’s downtown movie theaters, “Street of Dreams,” there is an interior shot showing the screen/stage area on page 94.

The Capitol Theatre was designed by architect Bertram C. Hill. This item appeared in the July 13, 1922, issue of Manufacturers Record:

Two photos of the Capitol survive in the collection of Hill’s papers at Southern Methodist University.

$50,000 doesn’t sound like a whole lot, esp.compared to the $2,000,000 price tags for the Majestic and Palace, both built the previous year – even considering they were each about 2-3 times the seating capacity.

BTW, Interstate did NOT open the Capitol, as it says in the introductory remarks, above; although, IIRC, the company did acquire it and the adjacent Rialto (Old Mill) at some time in the lives of these respective theatres.

The “new” Capitol Theater opened on December 16, 1922 as a low-end first-run house. It went from a Popular Amusement Company property, to an independent under R.J. Stinnette and Ephram Charninsky, to an RKO Southern to Interstate and finally to Trans-Texas closing on December 26, 1957 as a second run house.It was demolished beginning on February 19, 1959 with its antique bricks repurposed for other projects.

It was a Popular Amusement Company theater with 1,200 air-cushioned seats, a $20,000 Barton organ and six piece orchestra opening December 16, 1922 with the film, “Slim Shoulders”. The theater’s amenities and interior weren’t quite up to the competition, especially with the Majestic, Melba and Hippodrome. The Bertram C. Hill architected exterior of the building had an inviting style for theater row and it might be said that the attention was mostly there as the interior lacked what palaces provided in that era. Popular Amusement closed the theater within a year’s time. But the Capitol reopened as an independent the same year under R. J. Stinnette and Eprhram Charninsky (up until his death in 1928). The first film was “Six Days” on Sept. 20, 1923, the Capitol positioned itself as a lower price Elm/Theater Row house. Its true heyday was the mid-1920s.

By early 1929, fortunes sagged for the Capitol as sound technology and innovations were being adopted more quickly along theater row than the Capitol likely could afford. The Capitol downgraded to a double-bill second run house, the first on Elm Street since 1915. But later that year, the theater strategically got an exclusive deal to book RKO films as it moved into the sound era on July 29th. As the original theater wasn’t exactly soundproofed, the interior was bathed in celotex as any interior panache was buried under soundproofing and wall coverings.

In 1930, RKO Southern took over the Capitol and closed it for ten days to put in a newer sound system and more wall treatment. Almost immediately, RKO Southern was in dire economic straits and on June 2, 1931 the Capitol Theater closed in part due to the lack of a real air conditioning system and in part to stop paying labor. It closed again in December 1931 and reopened in January 1932 after Christmas. In 1933, RKO Southern shut down declaring bankruptcy.

Interstate took over the theater and under the venerable circuit, the Capitol finally hit its stride as improvements which included a modern air conditioning system making things more comfortable inside. The Capitol played mostly double feature westerns and held a handful of premieres of lesser “B” films and occasional exploitation fare. World premieres of Republic’s Roy Rogers film “Under Western Stars” and George Harriman’s exploitative “Tell Your Children” took place. Personal appearances by Rogers and Smiley Burnette, Monogram’s Tex Ritter, and “Song of the Range” stars Jimmy Wakely and Lasses White were among the stars who showed up.

The U.S. v. Paramount case that led to the famous consent decree in which Paramount agreed to separate itself from domestic theater exhibition selling out joint ventures such as Interstate and Publix. In a second wave of dispersals following the Varsity and Dal-Sec, seven theaters including the Capitol and the Rialto were sold in one transaction by Interstate to Louis Novy’s Trans-Texas Theater circuit on Feb. 24, 1954. Trans-Texas struggled along with all of theater row trying to battle population shifts that were beginning to doom most of the downtown houses.

On Oct. 2, 1957, Trans-Texas closed the Capitol to prepare to show Spanish language films after a remodeling. That rebranding began on Nov. 10, 1957 opening with El Bolero de Raquel starring Cantinflas. A dismal failure, the policy discontinued just five weeks later and the money spent in improvements and marketing were lost. The theater flailed for another week returning to second-run fare on Dec. 20, 1957 opening with “Hot Rod Girls” and “Girls in Prison.” A week later, the theater closed for good and its second to last double feature was “Phantom from 10,000 Leagues” and “The Day the World Ended.” The theater remained empty for just a little over a year and on February 19, 1959, the theater was torn down to make way for a parking lot. As noted, the bricks were considered distinctive if not historically interesting and salvaged for other projects.

1929 photo added courtesy of the Traces Of Texas Facebook page.

1935 photo added via Jim Foster. Capitol to the left of the Rialto. Rialto next door should be added to Nearby Theaters.