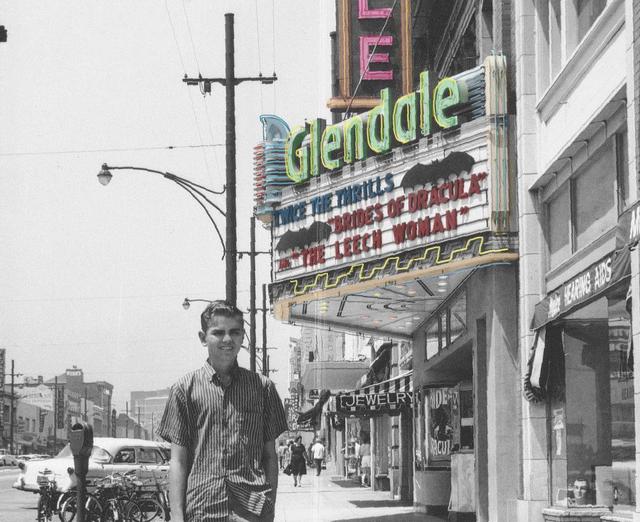 Here is a 1940 photo from the USC archive:
http://tinyurl.com/coowye

I worked there in 83/84. I remember the ghost upstairs and the creepy feeling I would get when I was up there alone. I remember ‘Dollar Tuesdays" and was working there for the opening of Ghost Busters and Foot loose. It would get sooo packed on those Tuesdays. It was a job I had during high school and really enjoyed it. It was demolished and they put a Tower records in its place (which since has closed). I wish the city of Glendale would stop tearing down all of those great old buildings and replacing them with new stale looking ones. A lot of Brand Blvd has lost its classic past. Bummer.

I worked here in late ‘79 thru the early 80s. I began as an usher, worked my way up to assistant manager and temporary acting manager. When I was hired on it was still a single screen. I worked there thru the 1980 remodel (see pic in ken mc post above dated 4/23/09), when it became the first multiplex in Glendale. I recall the theatres on Brand Blvd at the time being some of the last single screen theatres in Southern California. Now only the Alex Theatre remains as a vestige to those times.

Reopened as the Glendale Twin on June 13th, 1980. Grand opening ad in the photo section.

FACT OR FICTION I DO NOT KNOW BUT WAS TOLD AS A YOUNG ACTOR JOHN WAYNE LIVED AT THIS THEATER GUESS IT HAD ONE APT. OR A ROOM TURNED INTO ONE

Is this the same Glendale Theater briefly seen in the 1954 noir “Crime Wave”?