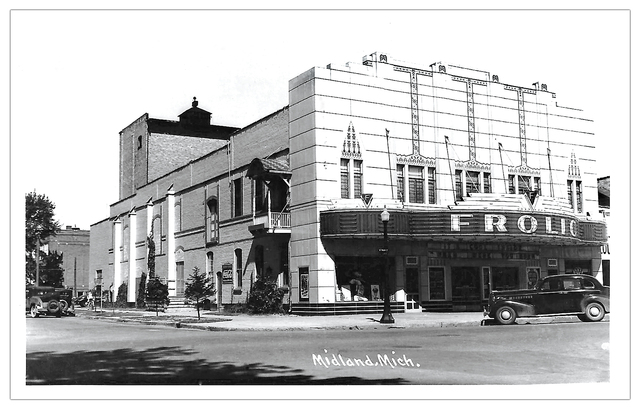 The Frolic Theater in Midland, Michigan dates back to 1921. In 1927 a Robert-Morton theater organ size 2/6 was installed. It was badly damaged by a fire in April 1943. Repairs were carried out and it reopened in 1944.

The Frolic Theater was closed in 1959.

Either Boxoffice’s reports of May 15 and May 29, 1943, were exaggerated, or the Frolic Theatre was rebuilt after being destroyed by a fire that month. One item claimed a loss of $200,000. It also said that the Frolic had originally opened in 1921.

The handsome moderne facade in the historic photo Lost Memory linked to above was the work of the Dearborn, Michigan, architectural firm of Bennett and Straight, who remodeled the house in 1936. The project was the subject of an article by E.D. Straight in the October 17 issue of Boxoffice that year.

The 1936 Boxoffice article about the Frolic Theatre can be seen at this link. A photo and partial floor plan appear on the subsequent page.

The fire at the Frolic Theatre in April, 1943, is confirmed by an article in the January 6, 1944, issue of The Film Daily. The Frolic was one of the theaters suffering a fire the previous year that had received permission from the War Production Board to rebuild. This is the portion of the article dealing with the Frolic:

“The second approval was for reconstruction of the Frolic Theater, Midland, Mich., owned by W. A. Cassidy of that city. Cost for repair of extensive fire damage to this 1,008-seat theater, which occurred last April, is estimated at $21,500. In justifying this application OCR pointed out that booth equipment and second hand chairs were on hand, that the Midland area now has a population of 20,000 with an additional 5,000 expected. (Dow Chemical has a large plant in Midland). Little additional critical material is required and the local labor situation is reported favorable, with all public utility connections available.”

Is this picture in the public domain? I would like to include it in a book I am writing. I grew up in Midland and as a child every Saturday I and my cousins would walk down to the theater to watch the matinee: one feature, one comic & one serial. 14 cents. Each of us had a quarter, we would buy a box of popcorn to share then have something left over to spend in the local 5 & 10 store.

PhilipTM: DonLewis claims a copyright on the scan of the photo he uploaded to Cinema Treasures, so you’d have to get his permission to publish it in a book. However, the scan copyright is independent of any copyright that might exist for the original photo. The lettering of the town’s name at the bottom of the photo indicates that it was a postcard, and it might or might not still be covered by a copyright issued to the original publisher.

If you click Don’s link in his comment of November 1, 2012, you can fetch a large image in which the attraction board under the marquee can be seen to be displaying the movie title When Were You Born? That movie was released in 1938, so I would guess that the photo was probably taken and published no later than 1939. Not all postcards were copyrighted, so this image might have been public domain from the beginning, but if it was copyrighted in 1939 then the copyright would have to have been renewed in 1967 in order to still be in effect.

I don’t think that postcard copyrights were renewed very often, as the business depended on having fairly recent images on the racks. But don’t take that as legal advice. The back of the card would tell if it was ever under copyright, but finding out for sure if any copyright was renewed might be difficult since Don’s card was obviously published long before 1967. Don might know the copyright status of the original. You’d probably have a better chance of getting in touch with him if you send him am message at Flickr than waiting to see if he responds to your comment here. He might not be getting emails notifying him of new comments on this page.

I have been doing research on my great-great-grandfather Leverett Anson Pratt of the architectural firm Pratt & Koeppe of Bay City, MI. There is a record of them designing and building an opera house in Midland, MI in 1888 in the book, “Industries of the Bay Cities” published in 1889. I wonder if this could be the building which was later remodeled in 1936. This is the only theater I have been able to find in Midland, MI that would fit.

JWenk: The Frolic, built in 1921, was not the old Midland Opera House. The Opera House is one of at least four early Midland theaters that are not currently listed at Cinema Treasures. A line from an extract from a history of Midland originally published in 1950 and found at Rootsweb names the four:

“…the old Star Theater, The Monarch, The Mecca, and the upstairs show in the old Fales building — yes, the famous ‘Midland Opera House’ back of where now stands the Reinhart Building….”

The phrasing of the history is not too clear, but it sounds as though the Fales Building and its upstairs opera house were gone by the time it was written. The Reinhart building itself was destroyed by a fire in 1954. It housed a J.C. Penney store, so it’s possible that the Fales Building was demolished to make way for a parking lot for the adjacent store sometime prior to 1950. I’ve been unable to find an address for either building.

Linkrot repair: The October 17, 1936, Boxoffice article about the rebuilt Frolic Theatre can now be found at this link.

The photo and lobby floor plan can be found at this link.