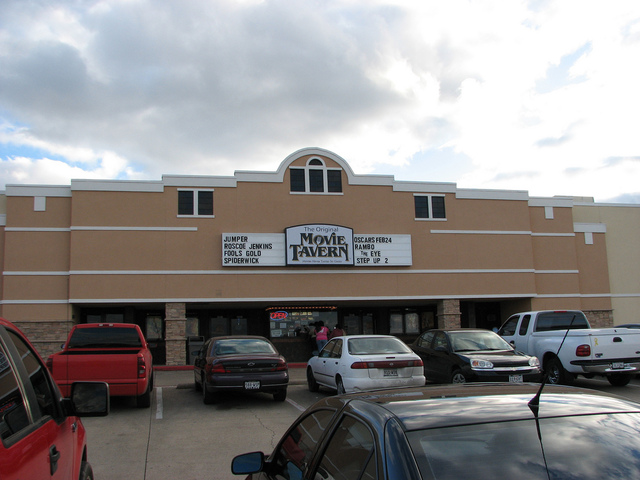 Formerly a General Cinema which opened as the Ridgmar Town Square on January 16, 1987. When GCC went under in 2002, Movie Tavern picked it up. Added two more screens a little while back. Known for showing WWE pay-per-views and sports games on the big screens. Also showed “The Rocky Horror Picture Show” every Saturday. It was closed December 2, 2018

Went to Rocky Horror for about the 80th time sat. night. First time at Ridgmar. Never Again.“Buy my sh*t!” “Tip me!” “Sit down” I know what to do .The casts awful “We know what we’re doing and do it our way only and look at me attitude completely ignores the whole spirit of the film.I don’t appreciate being told when and where to throw toilet paper. Me and the 4 other Rocky fans I was with will never return.Gas is cheap and Dallas is not far.

This opened as the Ridgmar Town Square on January 16th, 1987. Grand opening ad in the photo section.

Ridgmar Mall launched in 1976 theatre-less. General Cinemas would open a mile and a half away with its Ridgmar West on October 10, 1980. But an even closer facility for GCC would occur in the neighboring Ridgmar Town Square which was built in two phases in the shadow of the mall. The first phase opened in 1985. The second phase included General Cinema’s newest theater, a proposed six-screen, 1,700 seat facility to be called Ridgmar Town Square I-VI. Overbuilding of multiplexes was in full force with AMC’s Hulen 10, Central Park 8, UA Bedford 10, GCC’s Arlington Park Square 8, and UA Bowen 8 coming within a one year period.

The Ridgmar Town Square VI launched on January 16, 1987 and proved to be a winner. The former General Ridgmar West turned Cinema V was demoted to second-run, discount status in 1988 until its closure in February of 1998. Meanwhile, the megaplex boom was on finding AMC, Sony/Loews, and United Artist stepping up with large count movie theaters with stadium seating all over DFW. General Cinema’s lone entry was a 14-plex inside the Irving Mall. It wasn’t enough to save the circuit.

General Cinema was caught flat-footed with its aging multiplexes. Yet the Ridgmar was cruising along even after a rash of GCC closings in 1998. But Black Thursday hit on October 5, 2000. GCC closed all three remaining Tarrant Country locations with the Arlington Square 8, Central Park 8, and Ridgmar Town Square. Plans for an 18-screen AMC Ridgmar Theatre on the roof of the neighboring mall were abandoned in April of 2001 and that gave the Ridgmar new life.

Premier Theaters of Granbury took on the Ridgmar Town Square and after a refresh that allowed for pizza, appetizers and wine to be served in the complex, became the Ridgmar Movie Tavern. It launched on November 16, 2001 and became the first of many Movie Taverns. Its catchphrase was “Where movies never tasted so good.” It claimed to be the originator of circuits that followed including Texas-based Studio Movie Grill and Alamo Drafthouse and AMC’s efforts with its Dine-In theatre locations and Cinemark experimenting with CUT! Meanwhile, the Ridgmar Mall finally did get a megaplex when Rave Motion Picture Theaters launched there in December of 2013 providing competition for the aging Ridgmar theater.

Cinemark’s LeRoy Mitchell acquired the Movie Taverns but was forced to sell them when Cinemark took on the Rave Circuit due to competitive concerns. VSS-Southern Theatres bought the Movie Tavern circuit and kept its first location longer than expected. In November of 2018, Marcus inquired about obtaining the VSS-Southern and the 31-year old location did not make the cut.