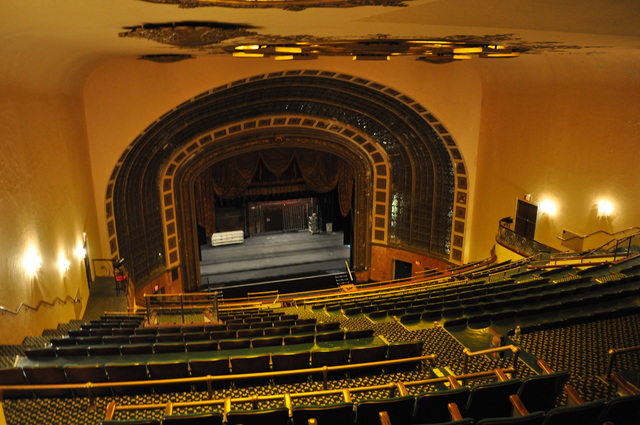 Opened on July 11, 1930, the Paramount Theatre is now a concert venue on Asbury Park’s long suffering boardwalk area. The building also contains a Convention Hall, that is equipped with a theatre organ.

Hi Howard, thanks for the article above. It just so happens that I was in Asbury Park this past weekend and took a walk “downtown”. I too saw several large, new restaurants and some fancy new stores, but I saw little patronage and a great many empty storefronts. I don’t know how they will make it through the winter. While there is lots of construction (and hope) there is also alot of DEstruction as well. Asbury seems intent on destroying most of what little remains of its glorius architectural past. There are several new condominium projects underway which will bring some very badly needed higher income people into the area, but there is still a very depressing feeling about this town. I was actually visiting friends in Ocean Grove (next door to Asbury and much, much nicer). I walked around Asbury in the middle of the afternoon and did not feel safe at all. I found myself looking over my shoulders the whole time and I’m not easily frightened.

Nonetheless, I did make my way over to The Paramount and it was actually open! There was a performance scheduled that evening of Kathy Najimy and Mo something or other. I wasn’t able to attend but the ticket agent did allow me to take a quick peek inside and it was in much better shape than I expected it to be in. It’s pretty big. I hope to attend a performance or movie here in the near future and will report back.

The Baronet appears to be open but there was little info.

p.s. Regarding the comment in the article above that the reporter found Asbury’s Starbucks “the lonliest in the world”! I’ve walked around Asbury several times and have never seen a Starbucks. No wonder it’s lonely. Where is it? :–)
If anyone else can shed any light it would be appreciated.

Other sources have the Paramount seating 1600 (the loge-level love seats took up a lot of room, could seat more with convention seating) and opening in 1929, the same year Convention Hall opened next door. This was opened WITH sound, the Western Electric standard bases are still in the booth. The entire complex was built of fireproof terra cotta brick and tile from the Raritan Valley clay companies, for those into such trivia (same material Empire State Building was built from).

The scope screen, with masking in place, was 20h x 40w. The fire curtain still hangs over the stage. 60 rails, was the best stage in Asbury.

For HVAC buffs (is there such a thing?) the entire orchestra has a “cellar”, where ice was poured in from an outside door and air circulated over it for cooling. Very efficient for its day.

HVAC buffs? Is there an “HVAC Treasures” website? That would be interesting reading.

Friends: a bit of clarification please – I just found this link to a theatre organ, currently located in the Asbury Park Convention Center. The photo certainly does not seem to be the Paramount auditorium. Is the organ over in the other part of the building? Out over the water? http://www.gstos.org/asbury.htm

The organ is in Convention Hall, not the Theater.

The Paramount will be featured in an episode of Fact Or Faked on SyFy sometime in the next two months.

I still have to stop for a moment sometimes first thing in the morning to just sit alone in the middle of the auditorium and appreciate just how lucky I am to play a small part in the history of this grand theater.

I was a member of Cinema Tresures a few years ago when I was working in another Vaudeville house in Upstate NY.

Thanks for the posters.

I saw a comedy show here a few years ago — majestic space, with the salty sea air a nice touch.