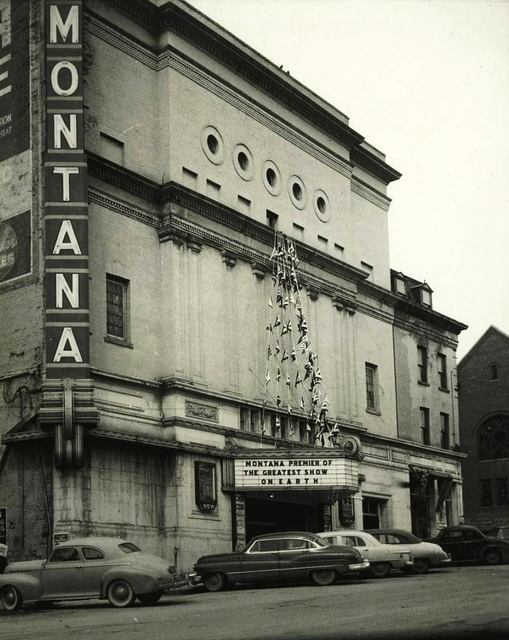 Built in 1901, the theater survived for years but was eventually condemned and demolished in the late-1980’s.

So nice to see another view of this theatre other than the one photo I took of it in 1981 during a family road trip, when I was just starting to photograph theatres. My shot was angled from the other direction, and showed the MONTANA vertical neon sign. The theatre was closed then, just as pictured in the above-linked black and white photo. I remember that the brick sidewall of the theatre had a faded and peeling painted sign reading Montana Theatre, with what appeared to be a later painting of the word “New” over it. I’m amazed at the 1901 date. I assumed it would have been built well into the Teens.

A 1901 issue of The Engineering Record said that Butte architect H. M. Patterson (Henry M. Patterson) had prepared the plans for a theater to be erected on Broadway for the Sutton Theatre Company. This was probably one of Patterson’s last projects in Butte, as in 1902 (or 1905— sources conflict) he relocated to Los Angeles. There he specialized in the design of churches, though he did design at least one Southern California theater, the Washington in Pasadena, done in association with architect Clarence L. Jay.

In 1915, this house was called the Broadway Theatre (it was at the corner of Broadway and Montana Street.) There is a photo of it and four other Butte theaters of the time here. The photos are from this page of a 1915 booklet about Butte, which has a few paragraphs about the theaters.

The booklet gives the seating capacity of the Broadway as 2,280. It was a very tall building, and undoubtedly had a balcony and at least one gallery. The lower seating capacity in later years was probably the result of closing off the upper levels of the house.

1949 photo added courtesy of Dave Byrne. Note the old Park Theatre advertisement on the wall. “East Side West Side” on the Montana marquee, was released 12/22/49. The nearby Park Theatre had already burned down 3 months earlier almost to the day, on 9/24/49.

This reopened as Montana on May 24th, 1940. Grand opened ad in the photo section.