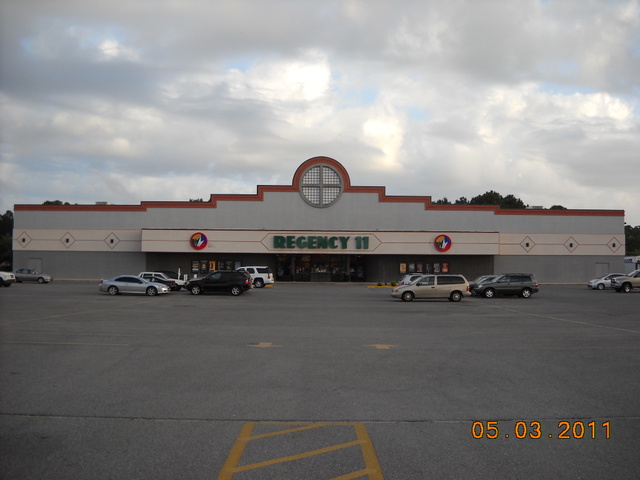 Nothing special to look at, though its facade attempts a bit of neon/Art Deco influence. Originally a Regency Cinemas theatre, it was bought by Regal Cinemas in 2005, and thank goodness: under Regency, its mismanagement and generally poor performance made it an often-miserable movie-going experience. Projectors broke down frequently, quite often during a presentation; speakers in most auditoriums were worn-out; film sound/sync problems were not unknown.

Under Regency, it was remodeled (making a closure necessary) and most of these problems were clearly addressed. That said, it seems to be struggling, if one can judge by the number of cars in the lot. Hurricane Michael struck in October 2018 and the Regal Regency Stadium 11 was closed in 2019 and was demolished in October 2019.

Looks like this was built by Eastern Federal Theatres. Unless there was a local chain in FL called Regency, I assume Regency was just the name of the theatre?

Scott Neff, Your observation about the Regency being an Eastern Federal Theatre is quite right. It opened as a 6 screen house. Their choice of film handling equipment was the root of their presentation problems. They had similar issues in Tallahassee at the Varcity, and Miracle and in Jacksonville at the Cedar Hills, Royal Palm and their two Drive-In operations, the Midway and Fox. Their 1970’s vintage Theatres, used Cinemeccanica equipment which were found to be more reliable, than their custom built film handling systems that went into their twinning operations and new builds after the late 1970’s.

This cinema is closed in 2019 due to Hurricane Michael. Article: https://www.newsherald.com/news/20190525/regency-company-regal-theater-in-panama-city-will-be-rebuilt

The Theater was demolished in October 2019, the 2018 movie posters were outside the whole time. Add “demolished”. Please