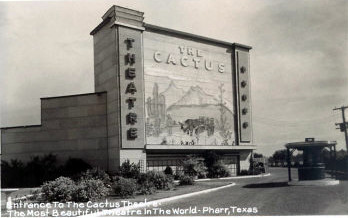 The Cactus Drive-In was opened April 12, 1946 with Maureen O'Hara in “The Spanish Main”. It had a capacity for 450 cars. On the front side of the Cactus screen along with the name was an outlined rendering of a chaparral cactus, a yucca plant, a cowboy, hills and clouds. It was operated by Claude Ezell and Associates Inc. It was twinned in 1971, doubling the car capacity.

An old photo-post card of the CACTUS @ this website.

Scroll down to “A Drive-In Tale” by Alton Moore for some memories of the Cactus:
http://www.psjabears.net/beartales.htm

The above address will map to the location of the drive-in.

Here is a 1961 aerial photo of the drive-in, courtesy of Earth Explorer and USGS:

1947 photo added courtesy of the America’s Past In Photos Facebook page.

The Cactus Drive-In was twinned in 1971, and its late July opening was noted in the August 9 issue of Boxoffice. The drive-in had doubled its car capacity with the expansion, and featured improved amenities such as a new, air conditioned concessions stand. The Cactus was an ABC Interstate Theatres operation.

I have a photo of my Dad in front of it. This was about 1946. My Papa was a technician and serviced theaters before working for RCA for 30 years