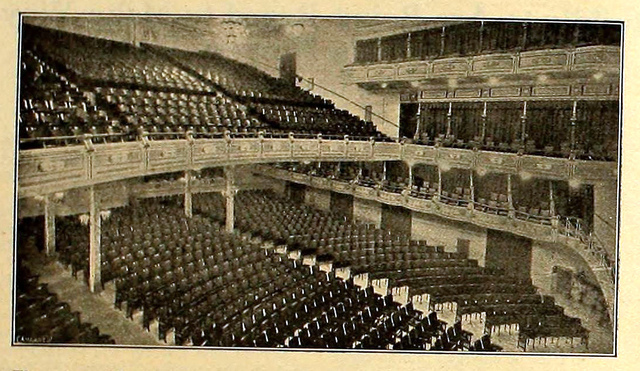 The Teatro Real Cinema (Royal Cinema Theatre) was a cinema and is now hosting live shows. The theatre is located in Plaza de Santa Isabel in central Madrid, close to the Teatro Real (Opera House) and the Palacio Real (Royal Palace).

On May 15, 1920, King Alfonso XIII inaugrated El Real Cinema, which showed a movie that day. The cinema was designed by architect Theodore Anasagasti and has 1,000 seats and 54 boxes.

In 1923, an outdoor cinema was installed on the roof, with a capacity for 800 people.

In 1924, a Wurlitzer 3Manual/11Rank theatre organ was installed in the cinema.

After the Spanish Second Republic began (1931), the cinema’s name was changed to Cine de Opera. At the start of the Spanish Civil War, a bomb caused incendiary damage to the building. The cinema re-opened in 1943.

The building was renovated between 1964 and 1965. In 1967 the cinema was remodelled to become the Cinerama for the screening of 70mm prints and the auditorium was later remodelled to accomodate 1,400 seats. Until 1992, the Real Cinema (Cinerama) was screening films in what was then its 1,367 seat auditorium.

In 1992, the company that owns the building ‘Real Cinema Actividades Cinematograficas’, hired architect Gilbert Lopez-Atalaya to renovate, so that there would be a new multiplex of four auditoriums, the largest auditorium having 400 seats and the other auditoriums totalling 670 seats.

Films are no longer shown.

In recent years, Teatre Real Cinema shows have been costume dramas, comedies and thrillers by famous playwrights like Agatha Christie, Neil Simon and the Alvarez Quintero brothers. Recently it was announced by the new management that contemporary and unpublished works would be presented. It had closed by April 2019.

According to Google, the theatre is now closed. As I couldn’t find anything online about its programme, this seems to be true.