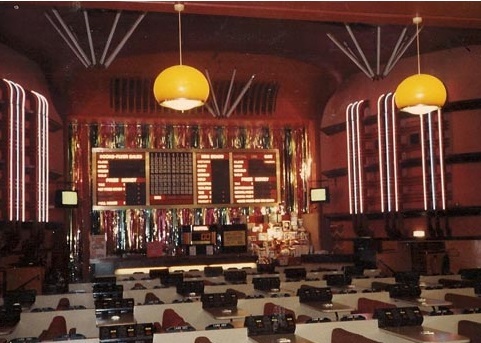 The Capitol Cinema is located on Churchfield Lane, at the junction of Newquay Avenue and Alfreton Road in Radford, a suburb west of the City of Nottingham. It was designed by Nottingham architect Reginald W.G. Cooper (his third cinema design project) and was built for the Levin brothers Invincible Cinemas Circuit, part of the S. Graham Circuit.

The Capitol Cinema opened on 24th October 1936 with Arthur Tracy in "Limelight" and George Bancroft in "Hell Ship Morgan".

Designed in a modern Art Deco style, the exterior has a protruding round feature over the entrance which has a slim square tower feature attached. The name ‘Capitol’ was place vertically on the tower. Inside the auditorium, the seating was provided in stalls and circle levels. There were decorative horizontal bands in the side-walls by the proscenium and these were broken by three sets of verical bands. The proscenium opening was rather narrow, which in later years made the screening of CinemaScope films a problem. Concealed lighting was in troughs in the ceiling.

The Capitol Cinema led an uneventful life and was closed on 8th June 1968 with Suzie Kendall in "Up the Junction" and Edd Byrnes in "Beach Ball".

The building fell into disrepair with water leaking into the former auditorium, damaging original plasterwork. In partnership with the buildings owner, Historic England & the National Lottery Heritage Fund, restoration of the cinema started in late-2019. Work to repair the exterior brickwork on the central tower fin was delayed in 2020 due to the Covid-19 pandemic.

The Capitol Cinema is designated a Grade II Listed building.