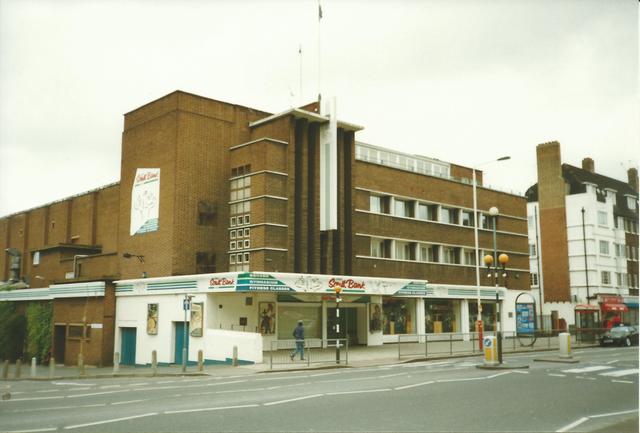 Originally on this site had been the 850 seat Clock Tower Cinema (1921-1936). It was being programmed by Bernstein Theatres in the early-1930’s and was purchased by them and demolished in 1936.

The Granada Theatre was opened by Granada Theatres Ltd. on an enlarged site. Opening day was 13th October 1936 with the films Gracie Fields in "Queen of Hearts" and Lew Ayers in "Trapped by Wireless". Attending the opening in person were film stars Sydney Howard, Sally Eilers and Rod la Rocque.

This Granada was the only cinema designed by architects E.D. Lyons, L. Israel and C.H. Elsom, who had won a design competition in 1934 for Wolverhampton Town Hall & Assembly Rooms. The facade has a brick tower over the entrance, which had a vertical fin sign with theatres name on it. The entire facade was brick with slim horizontal bands of white stone and and two rows of six small windows. Inside the foyer was rather plain and stark, whilst in the auditorium the seating was provided for 1,360 in the stalls and 736 in the balcony. There were large panels of coffered squares on each side of the proscenium, behind which were the organ chambers. On the side-walls were decorative motifs depicting musical instruments, the work of sculptor Frank Dobson. The theatre was equipped with a Wurlitzer 3Manual/8Rank organ which was opened by Harry Farmer. There was also a fully equipped stage and dressing rooms, but initially these were rarely used.

The Granada was closed on 12th November 1940 when it was damaged by German bombs. Repairs were made, but before it could re-open it was severly damaged by bombing in May 1941. It remained closed and after the war repairs and restorations were carried out and it re-opened on 12th September 1949.

Film programmes continued until the early 1960’s when bingo sessions were introduced on a couple of nights a week in 1962 and 1963. The last films were shown on 13th May 1967 with the double bill; Kenneth Connor in "Carry On Nurse" and Christopher Lee in "Devil Ship Pirates". The building was immediately converted into a full time Granada Bingo Club.

The bingo club had closed by April 1977 and it became a skate-board centre for a while. It then lay empty and derelict for several years until by 1986, it was gutted internally and re-opened as the London South Bank Squash and Fitness Club, today known as the Southbank Club.

You can see the back of this building on the trains in/out of Waterloo. I have always noticed that this cinema has no flytower. Did it have one before the 1941 bomb detroyed the stage end? As it is decribed as having a fully equiped stage.

I cant wait for someone to post some pics, John, can you get one next time your on that train?

A vintage 1949 photograph of the Granada, and the console of its Wurlitzer organ:
http://www.ukwurlitzer.co.cc/2197.html

Again, the usual factual errors in this listing, as unfortunately is a recurring theme with many of the listings on this interesting, if rather inaccurate web-site. Firstly, the reference to the Clock Tower Cinema that had previously occupied the site as having existed between “1921 – 1936” is incorrect as it had closed before 1936; and the statement that the Granada circuit simply programmed it from the early 1930’s and “was purchased by them in 1936” is also incorrect. Frank “Barnes” was not the name of the sculptor who provided the decorations of various musical instruments for the two splay wall grilles. The last films were not shown in 1965 as stated, whilst similarly the bingo club didn’t close in April 1977 as stated. I am sure, however, that the postcode is spot on!! Please (please) try to be more accurate, or perhaps try a bit of research or fact checking, rather than simply copying from other sources before posting these listings, as as has already been the case, these multiple errors filter through into other sources and are of course unhelpful to others interested in, or researching these buildings.

The Wurlitzer was taken out by Les Rawle who installed it in his home in Northolt. At the moment the organ is in Scotland.