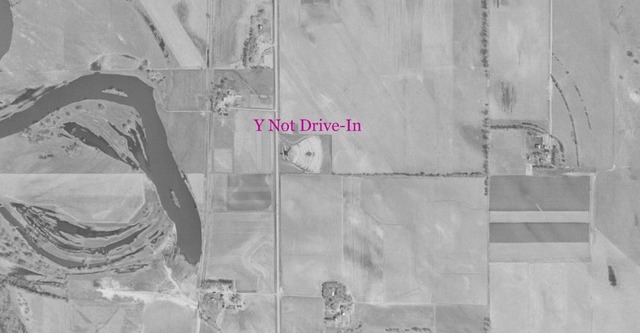 Opened by 1953, the Y-Knot Drive-In was operated by J. Phil Lannon and Theatre Booking Services in the early-1960’s.

Both the West Theatre and the Y Not Drive-In were operated by Donald Johnson’s Johnson Theatres from 1966 until 1974. They were offered for sale in the classified section of various issues of Boxoffice in 1973, and the July 8, 1974, issue ran an item saying that both theaters had been sold to Mr. and Mrs. Richard Reese, effective June 2.

The item also said that when Johnson bought the theaters from in 1966, the West Theatre had been called the Rivola. He remodeled and renamed it, and also updated the drive-in, and both theaters were operated until 1973 by his brother, Franklin Johnson.

Here is an undated aerial photo showing the Y-Knot Drive-In, in its splendid isolation. Comparing the photo to a modern Google Maps satellite view, the theater had to have been on 17th Road (called Lincoln Street inside the town) probably some distance south of town. That’s the only place the oxbow lakes and marshes along the Elkhorn River are as close to the road as they are in the old photo.

Odd name! “Why was it called Y-Knot Drive-in?”