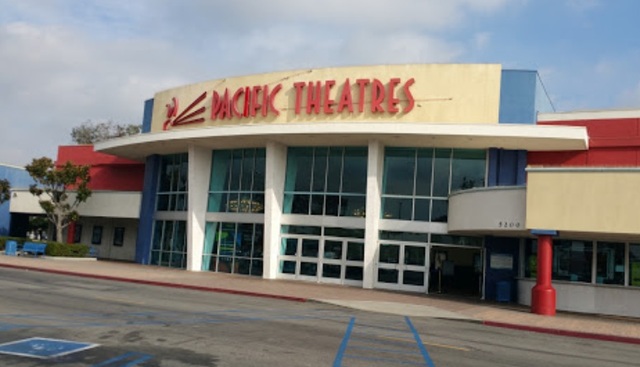 At a cost of $1 million dollars and eight months of construction the Lakewood Center Theatre, designed by George T. Nowak and Mel C. Glatz, opened on January 17, 1968. The Long Beach Press-Telegram said that the 1,200 seat venue was Pacific Theatres 71st location, most of them drive-ins. Pacific Theatres chose Merrill DeVine to be its managing director. DeVine previously managed the Picwood, Hollywood Pantages and the Cinerama Dome in Los Angeles.

The opening attraction was Sydney Poitier in “To Sir With Love”. On hand at the opening festivities, which the paper said 10,000 attended, were actors Jim Brown, Troy Donahue and Rudy Vallee. The architecture was very 1960’s modern with a large curved glass front, a gigantic lobby and a 60-foot concession stand. Pacific Theatres said that the four Austrian-made chandeliers in the lobby were valued at $6,000 each.

May 22, 1974 saw the opening of two more screens and then on October 24 it became the Lakewood 4. In June of 1981, the Lakewood Center South 1,2,3 opened in a new building at another location in the mall’s parking lot.

On March 19, 1999 after months of construction, during which it was closed and gutted and 56,000 square feet was added to the building, the brand new Lakewood Center Stadium 16 opened. It was designed by architect Dan Tanizaki with GFBA Architects.

The Press-Telegram said that the $12 million renovation brought its total number of seats to 4,800. And by the way, the original Austrian chandeliers are still hanging in the lobby.

Yes, the original house was equipped for 70mm, but I don’t believe they played anything in 70 until their 1977-78 booking of “Close Encounters Of The Third Kind.”

It was tobe a Cinerama house in the early days of planning. But the Roadshow and Cinerama days were about to end. So it became just a regular Pacific plex. Well the film “Battle of the Bulge” was produced by William Forman of the Pacific and Cinerama companies.

The major expansion of the Lakewood Center Theatres into the current 16-screen megaplex was the work of theater designer Dave Tanizaki, with GFBA Architects. The same team designed at least one other theater project, the Edwards Metro Pointe Stadium 12 in Costa Mesa, California, opened in 1996. This page at GFBA’s web site features a couple of exterior of the redesigned building.

Two of the best movies I got to see here was U2 Rattle and Hum and Back To The Future.

The original theater #1 had to be the best movie theater in the Lakewood/Long Beach area.

“The Rocketeer” was presented at Pacific’s Lakewood Center in 35mm Dolby Stereo beginning on Friday June 21, 1991.

Grew up going to this theater..moved away from Long beach and came back and saw a movie there in late 1990’s early 2000 and was sad to see the main huge theater changed.It was so deep and large originally you could throw a football around in it..saw many of great films there..Star Trek Wrath of Khan,Back To Future 2 and 3,Star Trek 5,Indiana Jones Last Crusade,Creepshow 2,Batman,Honey I shrunk the Kids,Who Framed Roger Rabbit and many others.

Lakewood Center was among just eleven theaters in the United States that installed the then-new Dolby Digital sound system for their engagement of “Batman Returns” which opened twenty-five years ago today. And here’s the link to a retrospective article that commemorates the occasion.