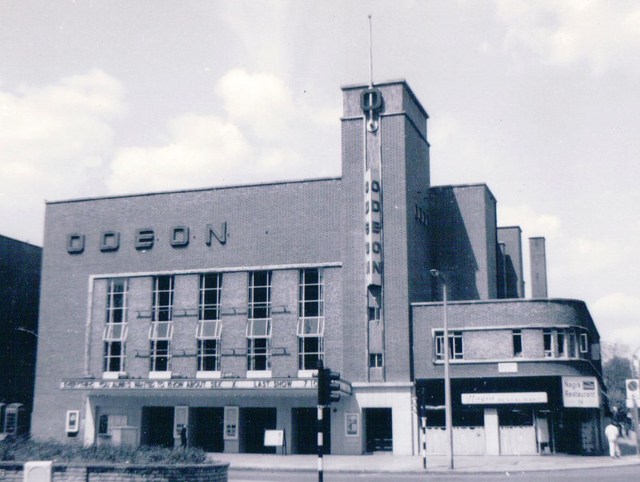 Located in the Bayswater inner-city district of west London on the corner of Westbourne Grove and Chepstow Road. The Odeon Theatre was planned by the Oscar Deutsch Odeon Theatres Ltd. chain in 1937, to be a 2,050 seat cinema to the design of architect Andrew Mather. Plans were revised and scaled down to a 1,870 seat cinema and some work was started on the building in 1938. Permission was granted in March 1939 to complete the building, but the outbreak of World War II in September 1939 halted all building work.

It wasn’t until 1955, that the Odeon Westbourne Grove was completed, to a re-design by architect Leonard Allen. The Odeon opened on 29th August 1955 with Dirk Bogarde in “Doctor At Sea”. Seating was arranged in stalls and circle and the interior decorative scheme was a rather plain 1950’s style, although there was a screen curtain which had sewn sequins on it that sparkled when the footlights were illuminated.

The Odeon closed on 9th December 1978 for tripling, reopened 21st December 1978 with 698 seats in the former circle and 200 seats in each of the two mini-cinemas under the circle in the rear stalls.

From 24th March 1983 it was taken over by the independent operator Panton Films Ltd. and re-named Coronet Cinema. This was only to last a short while (Panton also operated the nearby Coronet, Notting Hill Gate) and the Coronet Westbourne Grove closed on 9th June 1986 with “"Delta Force”, “To Live and Die in LA” and “Jewel in the Nile”. The site had been sold for re-development and the former Odeon was demolished in October 1986 and a block of flats with retail units was built in its place.

My god, this is such a stunning cinema.. My dream building!

A set over 100 vintage photographs of the Odeon, from its opening to demolition:
View link

I did relief manager at this Odeon many times between 1972 and 1974 really liked the theatre.

hi Robbie this is jeff remember?

Hello Jeff, yes I do remember you. WOW How you doing? you can contact me at would love to hear from you.