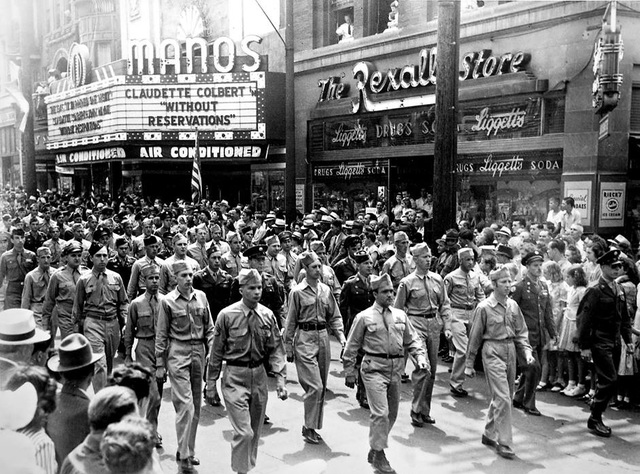 This theatre was located in downtown Uniontown and was part of the Manos Amusement Co. chain of Greensburg, PA. It opened on August 20, 1941 with Vivien Leigh & Lawrence Olivier in “That Hamilton Woman!”. It operated into the late-1980’s. Following closure it became a church and has since been demolished for a parking lot.

I cannot help but wonder if that notoriously bad movie, “Manos, the Hands of Fate” ever played at the Manos. The film’s story line involved a religious cult.

From the Brownsville Telegraph, August, 1941: “Area movie-goers are invited to visit the area’s newest movie theater. The grand opening of the Manos Theatre, which calls itself Uniontown’s newest and finest theater, is slated for Wednesday evening, August 20, 1941. The movie house’s operators boast that it is the most modern theater in western Pennsylvania. It is scientifically built to show sound pictures, and of particular interest to customers during these dog days of August, it is air conditioned! The opening screen attraction will feature Vivien Leigh and Laurence Olivier in "That Hamilton Woman,” showing continuously from noon until 11:30 p.m."

The Manos Theatre meant a lot to me when I was teenager because of the first-rate movies I saw there.

Among my favorites: “An Unmarried Woman,” “Coming Home,” “Who is Killing the Great Chefs of Europe?,” “The Muppet Movie,” “Dressed to Kill,” “Body Heat” and “The Dead Zone.”

It was there, too, that I saw the huge flop “Heaven’s Gate” in early 1981, after the movie had been withdrawn and re-edited from 219 minutes to 145 minutes. The Manos was one of the few theaters in Western Pennsylvania that took a chance on booking it.

Even the bad movies bring back good memories!

About 30-35 years ago I was friends with a boy whose father was a manager with the Manos company and his mom would clean the Manos in the mornings. I received a real treat when I stayed over his house one night. We were able to join his mom while she cleaned. I ate the leftover popcorn, drank a ton of soda and got to explore the whole theater. Downstairs between the lounges was a small room that had a bank-type vault in it FULL of movie posters. I guess when the movies were over they would just roll them up and throw them in. To the right of the lounges was a door that led to what I was told was the “bomb shelter.” It contained some mechanical equipment, the original 1940’s backup generator and had a super thick wood door (the kind that you locked by placing a bar across it) which led to a long tunnel like hallway then to stairs which led out the back of the building. Given that the place was built during WWII I kind of believe the story. I wonder what they did with all of those posters?

In 1970, when I was only 8, my family and I visited our aunt and uncle who lived on Race Street in Uniontown (we were then living in the Detroit suburb of Warren, Michigan). Their next-door neighbor just happened to be the manager of the Manos – I believe his last name was Frankenberry – who gave me and my sister a pressbook of “A Boy Named Charlie Brown (which had just finished playing at the Manos), as well as a vinyl 12-inch record of radio spots for Walt Disney’s "Blackbeard’s Ghost.”

Pity I didn’t keep either of those, considering how valuable those are now. (“Charlie Brown” also has some historical merit to it as that was the very first theatrical film produced by CBS Films, known at that time as Cinema Center Films.)

Pity also I never got to see a film at the Manos while we visited. (I never saw “Blackbeard’s Ghost,” and I didn’t see “A Boy Named Charlie Brown” at the theater; thanks to my folks' laziness, I had to wait until CBS first aired the film on TV around 1973. Now I have the original 1970 Columbia soundtrack album on vinyl, and soon I hope to buy the DVD of that film.)

I understand the original “Star Wars (Episode IV: A New Hope)” played the Manos when it was rereleased in 1979. My family and I were visiting our aunt and cousins again in 1979 (I was then 17 and my family and I were by that time living in Glenwood, Illinois; my uncle, sadly, had passed around 1973). As fate would have it, however, “Star Wars” was rereleased after we visited in early August 1979, and I had to see it back in Illinois.

Can anybody confirm If “Star Wars” was indeed shown at the Manos in 1979? Any newspaper ads?

I worked at the Manos for many, many years. Lots of great memories…Except changing the marquee Tuesday evenings at 10 PM in the rain and snow…Regarding the post about the room with the movie posters, no. I do not believe that they were posters. The items in that vault (the Manos was a bank before a movie theater) were movie ads, press releases and other things for placement in the newspapers. The center door (between the restrooms) in the basement lounge was the manager’s office. The movie posters From the glass cases at the front of the building) were always rolled up and returned with the film cans when the movie changed (or we got yelled at). With regard to the “Bomb shelter', yes, the Manos was designated a bomb shelter (at the height of the cold war; a lot of buildings in the downtown, and all of the schools received this designation). All of the shelters stored many barrels of "Civil Defense water” (a 25 gallon barrel of distilled water), food (mostly soda crackers as I remember) and medicine barrels with basic home medicine chest first aid supplies. I would assume this was to assist with basic human existence in the event of a nuclear attack…Getting back to the Manos, we referred to the walkway between the basement lounge and the rear of the building as the “tunnel”. Also at the rear of the tunnel, across from the generator, was a fenced in “cage” where tickets and other items could be secured via a padlocked door. The “glowing blue clock” STILL EXISTS…in fact, there were 2; the one from the Manos and its twin from the State…They are currently in someone’s home in Uniontown…Back in the mid-90’s, I was told that one of the stuffed shirts on the board of the directors of the State Theater Center for the “arts” decided one day that they “OWNED” the clocks (which is not true, they did not pay for them, Manos Enterprises did). They took them from the State Theater without permission, as I understand it. Sad. Very sad. The clocks need to be returned to their rightful place. Feel free to post any questions about the Manos, I will be glad to reply.

TechDirector: Did the original “Star Wars, Episode IV: A New Hope” play at the Manos for its August 1979 rerelease?

The address is ridiculously wrong. Looking at one clear exterior shot, it seems that it was at 8-12 E Main between the currently extant building on the corner, and what looks like the old Mahaney/Exchange/Fuller hotel next door, which is also now a parking lot.

I’m not sure exactly when this was demolished, but the hotel, which is part of the same parking lot today, was mentioned in a 1996 guide to the National Road (US 40).