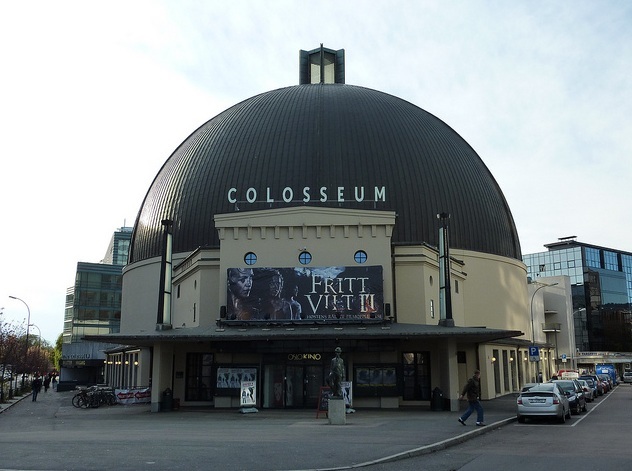 Located in the Majorstuen district of Oslo, the Colosseum Kino opened on 14th January 1928 with a seating capacity of 2,100 making it Scandinavia’s largest cinema at that time. Designed by architects Jacob Hansen and Gerhard Iversen its Classical style entrance is dwarfed by the massive dome which contains the auditorium. On the 1st July 1929 it was purchased by the Norwegian government

Live concert performances have been staged here, when in 1953 Louis Armstrong appeared and on 7th February 1954 Billie Holiday performed. The Coliseum was home to the big blockbuster films beginning in 1958 when the Cinemiracle process was installed for the film "Windjammer". The cinema was equipped with 70mm equipment in 1960 and the seating capacity reduced to 1,250. Films which played here include; "South Pacific", "Cleopatra", "My Fair Lady", and "The Sound of Music". On 15th February 1963, the cinema was almost lost, when just as the premier of the film “Mutiny on the Bounty” was about to begin, the carpet in front of the screen caught fire and a few hours later, the huge dome collapsed. The city council decided to re-build the cinema to its original design and it re-opened on 12th September 1964 with “Lawrence of Arabia” and a reduced seating capacity of 1,158.

The cinema was sub-divided with three screens created in the former stalls area and they opened on 5th August 1987 with seating capacities of 274, 151 and 115. The main auditorium with seating in the former circle extended forward now has 978 seats and is THX certified.

The Colosseum Kino was renovated both externally and internally in April 1998 when it closed for several months. It is operated by Oslo Municipal Screens (Oslo Kino) who operate 8 cinemas in the city with almost 30 screens.