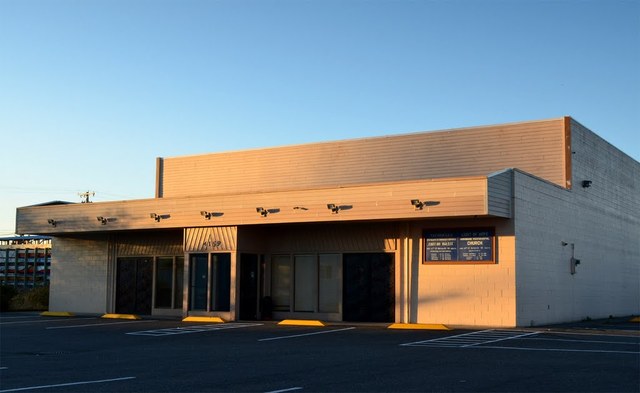 The Marysville Twin Cinema was built by the A Theatre Near You chain, which had its headquarters in nearby Smokey Point, Wash.

The exterior of the theater had a huge "1" and "2" painted on either side of the front doors.

This theater met its demise, more or less, when Regal opened a fourteen-screen theater a few blocks away.

Any idea when this theater opened? There was a one screen Marysville Theater in 1963, operated by North Coast Theaters.

Question answered. The theater opened in January 1982, according to this article:
http://tinyurl.com/5reoar

A January 1960 article in Boxoffice magazine noted that Fred Thibodeau was the owner of the New Marysville Theater at that time. Clearly there were at least two theaters in the city, but the gap between the first one’s closing and the second one’s opening in 1982 is unknown. The article I posted immediately above implies that the first theater closed in 1960, but as it was still listed in the 1963 IMPA I don’t think that’s the case.

The first theater was located west of State Ave. (the main drag in Marysville) in the old downtown district. For many years it was the home of the local Moose Club. I have no idea what has happened to it, but the Moose moved away.