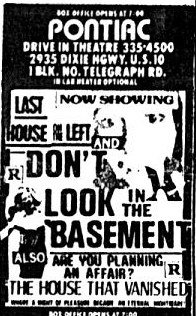 The Pontiac Drive-In opened in May 1950 with a 794 car capacity. It was operated by Elton Samuels and William Clark of Clark Theatre Services, Detroit. In the 1970’s, capacity was 1,200 cars. The drive-in closed in 1990 and was demolished after a series of fires.

Many photos on this site:
http://tinyurl.com/2s7uss

The 1949 Film Daily Year Book was the first edition to include a Pontiac MI drive-in, and it had two – the Blue Sky and the Starlite. Both remained through at least 1951. We know the Blue Sky was really in Auburn Hills.

The Starlite, capacity 300, was also included in the first Theatre Catalog drive-in list in the 1948-49 edition. Its address was Williams Lake and Airport Rds, and sure enough, a 1951 aerial photo shows a drive-in at that intersection. Aerials through 1973 showed that location intact, and the 1999 aerial still showed the ramps. Topo maps for 1971-84 also showed that drive-in.

As I type, Bryan Krefft’s description of the Blue Sky, which was actually in Auburn Hills, says, “The Blue Sky Drive-In opened in 1948, around the same time as two other drive-ins, the Walled Lake … and the Pontiac Drive-In.”

From its location, the Starlite, actually in Waterford Township, must have become the Waterford Drive-In. Were folks also calling it the Pontiac? And if not…

I just uploaded a photo from the June 19, 1948 issue of Boxoffice, which published a note about the “new changeable program sign recently installed in the Pontiac, Mich., drive-in.” Which drive-in was that?

Also, an entry in a construction roundup in the March 18, 1950 Boxoffice said, “Pontiac, Mich. – Construction of 750-car drive-in on Dixie highway begun by Elton L. and Marjorie Samuels. To open in May.”