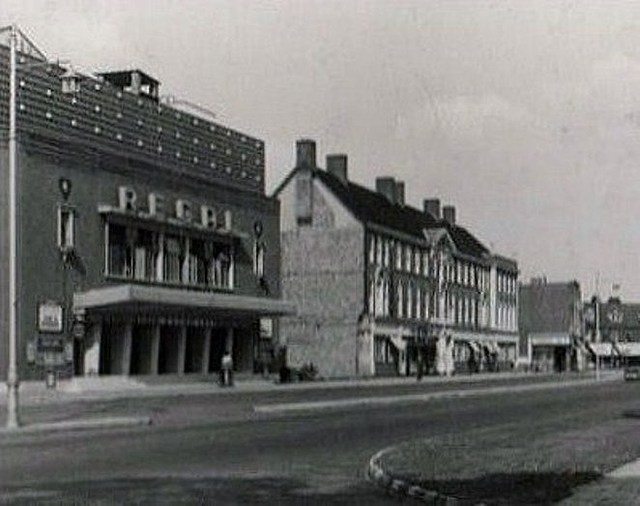 The Regal Cinema opened on 26th March 1938. It was built for Lou Morris and was almost identical to his Regal Cinema, Bridlington, East Yorkshire. In fact the same architect, Leicester based C. Edmund Wilford, designed both Regal’s. The Regal Cinema, Walton-on-Thames had seating in stalls and circle levels and there were large decorated panels on the side-walls flanking the proscenium which were the work of interior designers Mollo & Egan. A wide decorative band ran down the length of the ceiling which contained backlit panels. It was equipped with a Compton 3Manual/8Rank plus Melotone theatre organ which had an iluminated console on a lift in the orchestra pit. It had a 45 feet wide proscenium, a stage 20 feet deep and three dressing rooms. There was also a cafe for the convenience of patrons.

The Regal Cinema, Walton-on-Thames also followed a similar history to the Regal Cinema, Bridlington and was taken over by Arthur Cohen’s Mayfair Circuit in around 1941 and from 30th August 1943 was sold to Associated British Cinemas(ABC).

The Regal, Walton-on-Thames was re-named ABC in 1963 and was closed on 11th December 1971. It was later demolished and shops were built on the site.

(The Regal Cinema, Bridlington still exists today, in use as a Gala Bingo Club until its closure due to the Covid-19 pandemic in March 2020.)

I lived in Walton on Thames from about 1967 to 1979 ans was a regular at the Regal/ABC in New Zealand avenue. What a wonderful piece of art deco architecture what a loss when demolished in the 1970s.

As an added compliment to the photo in the profile gallery with the two-tone car parked opposite, have uploaded a photo of the feature showing at the time, “JetStorm” directed by Cy Endfield.

This 1959 film had its out of London release some two-thirds of the year through 1959 so the picture date would be around August/September of that year.

The iconic façade and entrance is partially visible when the steps and entrance to the Regal are featured for a brief few moments in the 1959 feature film The Price of Silence with Gordon Jackson meeting Maya Koumani and the visiting the Regal café. The film also starred the lovely June Thorburn before her devastating accident.

Another criminal demolition of an impressive cinema.

The Regal can be seen in several movies of the fifties/sixties including The Sound Barrier and several B movies shot at Walton studios. One of these, The Third Alibi, also has a scene shot in the foyer.

May I add “Rag Doll” to this listing. Captures from that film as well as “Sound Barrier” and the “The Third Alibi” can be seen on www.reelstreets.com Clearly “The Price of Silence” will have to be an early addition.

The front and interior of the cinema was also filmed for the Children’s Film Foundation feature “Raising The Roof”, filmed in Eastman Colour in 1971, shortly before it closed down.