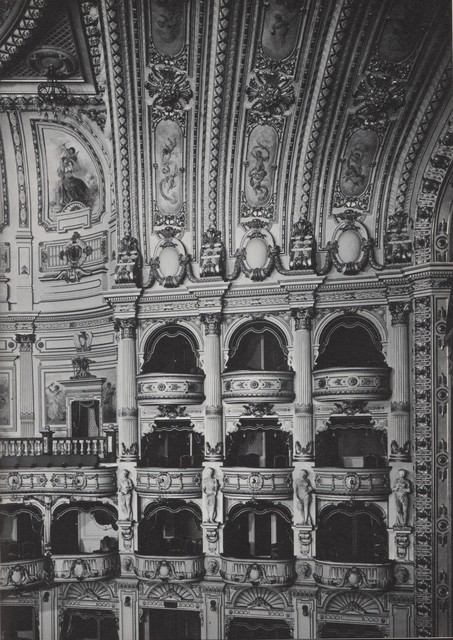 Opened as the London Opera House, a project of American impresario Oscar Hammerstein to have his own theatre in London which would be a rival to the Royal Opera House, Covent Garden. It opened on 13th November 1911 with a production of an opera new to London "Quo Vadis?" by Jean Nougues.

The building was huge, the area covered 24,500 square feet of ground and cost over 200,000 pounds to build. It took up an entire block along the newly constructed Kingsway. The length of the façade was 272 feet and was treated in a French Renaissance style in Portland stone with Norwegian grey granite bases. The building was 80 feet high and had Corinthian pilasters on the upper storey. A notable feature was a centre window which was 39 feet tall. On the main cornice were twelve statues sculptured by Thomas Rudge of Clapham. At the ends of the building were groups of three figures, representing Melody and Harmony, and over the central window were seated figures representing Inspiration and Composition. Between these and the end groups were four single statues of Comedy, Tragedy, Dance and Song.

The entrance hall was flanked by white and gold fluted columns, surmounted by bas-reliefs of famous composers.

The interior matched the exterior in elegance and extravagance. It had everything an opera house of its time should have. Designed in a lavish French Renaissance style with three rows of three boxes plus two stalls boxes on each side of the proscenium (that’s 22 boxes in total), three balconies and numerous painted panels on the ceiling. The seating was provided for 675 in the stalls, 40 seats in the boxes, 625 seats in the dress circle, 403 in the upper circle and 344 in the gallery. The proscenium was 44 feet wide, the stage 83 feet deep and there were 13 dressing rooms which could accommodate a total of 76 artistes.

With all good intentions and despite having a beautiful building, Hammerstein soon came up against his rivals at Covent Garden. They had the international stars and a well known repertoire of opera’s, and the London Opera House was left with new works or those that were not so well known. Hammerstein was forced to close the London Opera House on 13th July 1912. He returned to America, said to be 47,000 pounds out of pocket.

The theatre remained closed until Christmas 1912 when French impresario Fernand Akoun took over with a season of variety and films. Oscar Hammerstein then disposed of his interests in the building to a new company London Opera House Ltd. They experimented with variety shows and then a revue "Come Over Here" which ran for 217 performances. Three other shows followed which were not successes and the theatre was closed more than it was open.

In 1916 Oswald Stoll took control and staged several attractions which were only minor hits. On 30th April 1917 he converted the building into a full time cinema, known as the Stoll Picture Theatre, and at last, this was a success. A Jardine tubular pneumatic orchestral organ was installed in 1927, played by Jack Courtney and it was so popular that in 1930 Jardine installed a larger theatre organ. There was a large orchestra to accompany the silent films.

The Stoll Picture Theatre, despite its ‘out of the way’ location was a popular family cinema and stage shows were introduced as part of the programme. It began loosing out to the newer, more modern cinemas opening in London’s busy West End and the Stoll Picture Theatre was closed in September 1940 with a double feature film programme and a stage show. The effects of Hitler’s Blitz on London took its toll on ‘family’ audiences.

It re-opened on 1st September 1941, but as a live theatre presenting mainly revues and musicals. Oswald Stoll died in January 1942 and the theatre was taken over by Emile Littler, and re-named the Stoll Theatre. Shows that played during the next few years included revivals of "Rose Marie", "Lilac Time", "Show Boat" and "The Student Prince". In 1947 it became the home of a series of "Ice Spectaculars" staged by Tom Arnold on the enormous stage. A revival of "Wild Violets" was followed by a transfer from the Theatre Royal, Drury Lane of "Oklahoma". In 1951 the Festival Ballet performed for a sell-out season with Anton Dolin and Alicia Markova. This was followed by "Porgy and Bess", Ingrid Bergman in "St. Joan at the Stake" in October 1954. "Kismet" with Alfred Drake and Doretta Morrow opened in April 1955 and ran for 648 performances, the longest run at the theatre. Some Italian opera filled in until the final production at the theatre was Laurence Olivier and Vivien Leigh in "Titus Andronicus". The theatre closed to a packed house on 4th August 1957. There was talk about it being converted into a Cinerama Theatre, but the London Casino was chosen for that role.

It had been purchased by a development company to be demolished and an office block to be built on the site. Permission to demolish was given only on the proviso that a theatre would be included in the new development.

It was demolished in 1958 and a new office block rose on the site, the new theatre was in the basement, with an entrance tucked away around the corner in Portugal Street. This opened in June 1960 as the Royalty Theatre, now known as the Peacock Theatre (which has its own page on Cinema Treasures). The Royalty Theatre became London’s third Cinerama theatre for a while in the late-1950’s and early-1960’s.

The loss of the Stoll Theatre was one of the great tragedy’s of London’s West End, and if it had survived another few years, would definitely have been granted Listed building status and saved. Sadly back in 1958, the greed of commerce was king and it was ‘out with the old, in with the new’.

The Stoll had a very long and elegant facade. I saw a photo once of the interior, taken from a balcony and looking toward the stage. Very nice ! When I sailed to England for the first time, as a youth in 1959, I went looking for the Stoll and was disappointed to learn that it had recently been demolished. Close to it was a tunnel portal for tram cars and I learned that the trams had also recently gone. So I “batted zero” that afternoon !

Ron, If ever you return, you will see the Kingsway tram tunnel is still there. It is now partly used as a road tunnel, partly used as offices for the Thames flood defence and the entrance at the top of Kingsway (beside Holborn) is still unused and has the cobble road and tram track still in place!

I have a book (somewhere in my attic) which has a nice interior photograph of the Stoll Theatre. It was indeed a splendid theatre, unfortunately gone before I came to live in London.

Ken- I recall that the tram tunnel portal, complete with tracks, was still in place when I looked for it circa-1990. Another classic London theatre which I “just missed” in 1959 was the second Gaiety Theatre near Charing Cross Station. Site of many a famous musical, I later learned that it was razed about 1957 after standing vacant for a long while. The Stoll really was a splendid gem of a building !

The Stoll was London’s greatest theatre loss especially considering it was unique in being housed in such an outstanding building worthy of protection status even without the theatre inside! London never possessed any really great movie theatres on a par with say the N.Y. Roxy or Capitol but this was it’s finest live theatre.

I was lucky enough to see a number of productions at the Stoll as a child, including Oklahoma!, the Festival Ballet, Antonio and his Troupe amongst others. The auditorium was spectacular. In reply to Paul Lewis, London may not have possessed any cinemas to compare to the New York Roxy or Capitol, but the Granada (Gala) Tooting and State Kilburn would give them ‘a run for their money’ in their hey days – in fact, they are none-too-shabby now.

Hello everyone. I came upon this site after searching for the Stoll Picture Theatre, which I had not previously heard of. Ken’s links photos are superb, and show the exterior to great effect. However, we also have rainy days (and nights) here in London, and I found this link, which shows a wet London from years gone by. The Stoll is at 1:14-1:23 in the clip.

Hello, on going through my Dad’s papers after his passing I found a programme for the Stoll Theatre Kingsway commencing Monday April 20th. On the back it has the next weeks programme for week of April 27th 1942. My Dad was stationed in Red Hill during WW2 on 457 Squadron. If anyone out there is a collector I am happy to put it in the post.

The exterior and interior are featured in Laburnum Grove(1936)available on DVD.

I would love to have the programme that your wrote about. I would scan it and put copies on my website.