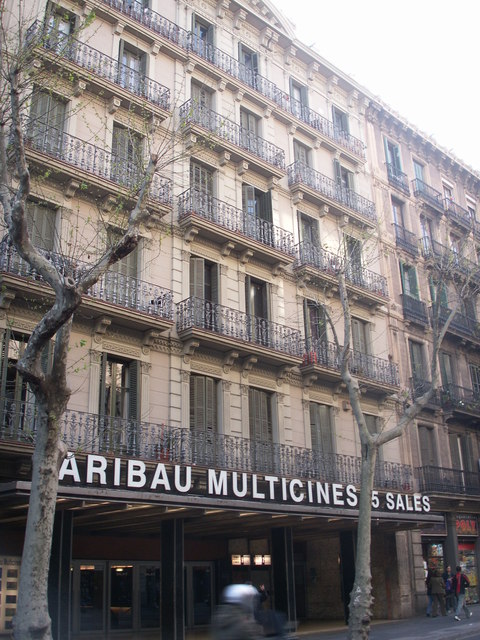 The Aribau Cinema opened on 7th December 1962 with Natalie Wood in "West Side Story". The architect was Pere Ricart Biot and the interior was designed by Antoni Bonamusa. Seating was provided for 1,174 in stalls and balcony levels. The style was ‘modern’ 1960’s, an unusual feature was the auditorium side-walls treatment. The left side was draped with curtains, the right side was rough brick. The large screen had no curtains and was wall-to-wall.

Other films which played on the large screen of the Aribau were “The Adventures of Tom Sawyer”, “Jesus Christ, Superstar”, “Man of La Mancha”, “Grease”, “Hair”, “Yentl”, “A Chorus Line”, “The Cardinal”, “The Graduate”, Kramer v Kramer", “Victor Victoria”, “The Exorcist” and many other major films.

In recent years (sometime since 1995), a new building has been built across the street at Carrer d'Aribau 8-10, and this has four additional screens which seat 223,155,246 and 215. The main original auditorium remains intact at 1,174 seats.

The Aribau Multicinemas was closed on October 21, 2021 with Daniel Craig in “No Time to Die”. It was converted into a live theatre which opened on 1st December 2021. After 10-weeks it reverted back to cinema use.