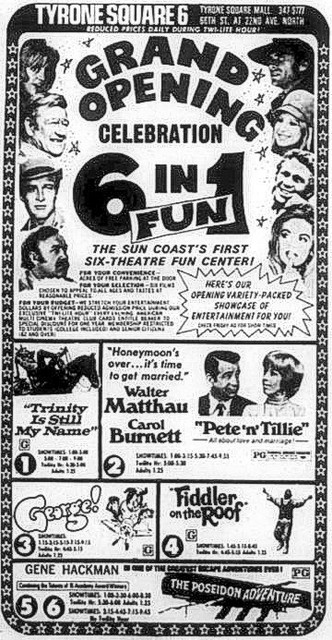 The Tyrone Square 6 opened in 1972 and closed in January of 2007. An Old Navy store is located at this address today.

Lost Memory, the grand opening ad is on this page at View link

There was an another theatre in the mall that opened in September, 1965.
picture and grand opening announcement is on this page at View link
Listings for it disappered in 1979.

Correction to the Sept 12 posting: It was renamed 9th Avenue theatre when AMC took it over. It closed in 1981.

It opened by somebody else then ended up with the Wometco circuit.

Mike and Lost: The Wometco house that opened in December 1965 was called the Crossroads Theatre. It was the subject of an article in the May 16, 1966 issue of Boxoffice. A first-run luxury house, and the Wometco circuit’s 39th theater in Florida, it was located in the Crossroads Shopping Center, just off of Tyrone Boulevard. It opened as a 1200 seat single screener, but provisions were made to add a second auditorium, to seat 600-800 patrons, and the article said that Wometco intended to add the second auditorium later that year. The architect of the Crossroads Theatre was A. Herbert Mathes of Miami.

Some sketchy results of Google searches suggest that the Crossroads Theatre was later replaced by, or altered into, the AMC Crossroads 8 Theatres, at 2190 Tyrone Blvd., which appears to have opened in 1987, and after closing in September, 2002, was demolished along with some other buildings in the shopping center to make way for a Home Depot.

Incidentally, A. Herbert Mathes was a noted Miami architect who designed a number of large buildings in that city and in Miami Beach, including the Versailles hotel tower and ballroom addition to the Fontainebleau Hotel.

Plans for construction of the 2200 seat AMC Crossroads 8 were announced in the St. Petersburg Times of August 8, 1986. The article said that the Crossroads 2 would be closed when the new house was opened in 1987, and would be converted to retail space.

Also, the August 16, 1965, issue of Boxoffice has a list of theaters recently opened in shopping centers, and one of them is a 1000 seat house called the Tyrone Theatre, located in the Tyrone Shopping Center, St. Petersburg. There’s a photo of the front, and it shows a typical, nondescript shopping center theater of the era. An ad for the Tyrone Theatre in the August 14, 1965, issue of The St. Petersburg Evening Independent includes the line “Wurlitzer Concert on our stage, 8:00PM.” The feature film, “Lord Jim,” was also scheduled at 8:00PM. That must have produced quite a cacophony.

My father’s construction company built many of the AMC theaters in the Tampa Bay area including the Crossroads 8 theater which opened in 1987 near Tyrone Square Mall. Screens 1 & 2 at Crossroads 8 were THX-certified, making those two screens some of the best places to see a film (screens 6 & 7 at AMC Hyde Park 7 were also THX-certified).

I would often make a special trip to Crossroads 8 to see important films; I recall seeing Clear and Present Danger there in 1994 and being completely overwhelmed by the picture and sound. I remember this being the first film where I would be able to directly compare the THX theater presentation and my home theater presentation. Clear and Present Danger ended up becoming the first home video release (via laserdisc) to include a Dolby Digital soundtrack.

Too bad Crossroads 8 ended up being torn down.

6-Plex photo and grand opening ad has been posted here.