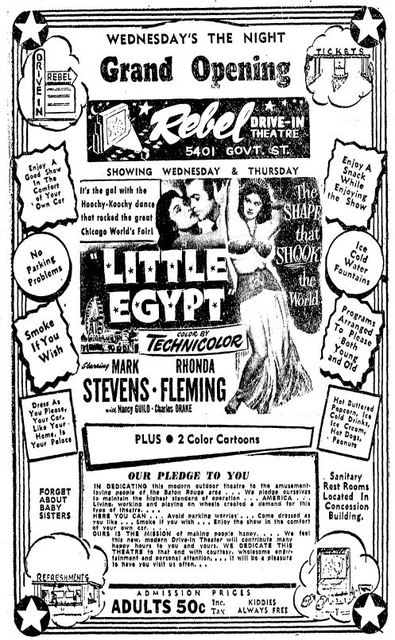 Had a large Rebel flag on back of screen. The Rebel Drive-In was opened on February 20, 1952 with Mark Stevens in “Little Egypt”. It was still open in 1970.

This was among Baton Rouge’s six drive-in screens (for one brief moment in 1970, all existed in operation, with a twin just built and one on its way out for a new expressway addition.) The Rebel was one of two that were in the middle of town. Its operation ended in early 1973 and the site is now occupied by a (closed) shopping center, several fast food outlets and a Mexican restaurant and bar.

This opened on February 20th, 1952. I have uploaded an aerial of the drive-in as well as its grand opening ad here.

yep, that Rebel Flag would go over BIG today….