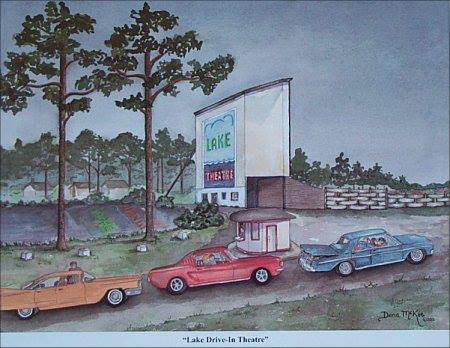 The Lake Drive-In was located off of Ingalls Avenue and Market Street, right beside Jerry Lee’s Grocery Store. In the mid eighties, some speaker stands were still there and the grass had grown really high around it. We used it as a hangout for off campus lunch in high school in ‘84,'85,'86. After Hurricane Katrina, in 2005, it became a FEMA trailer park. So there is absolutely nothing left of it now.

I worked for Gulf States Theatres when they operated this theatre. This was one of those typical 1950â€™s drive-ins with the managerâ€™s apartment in the tower and a large neon sign also on the tower. I spent a dayâ€™s down there in the late 70â€™s and helped them repair speakers and find a short in the underground wiring. We must have repaired a hundred speakers or more. The concession stand/projection booth was also the typical one cafeteria style. A second screen was located in the back and must have been added in the late 60â€™s. They did go to the trouble to re-direct the speaker poles when the addition was made. The theatre never made it to have FM sound and closed sometime in 1977. Hurricane Frederick took the screen tower in 1979.

One of the funniest memories is standing at the ticket booth and listening to the cashier explain why a woman would not want to take her 10 year old granddaughter in to see Alice in Wonderland. While the grandmother thought it was the Disney film, we were actually playing the X-rated version.

My dad(Red May) ran the drive-in from 1951 or so until 1966. I grew up living under the screen. Was quite an experience growing up there