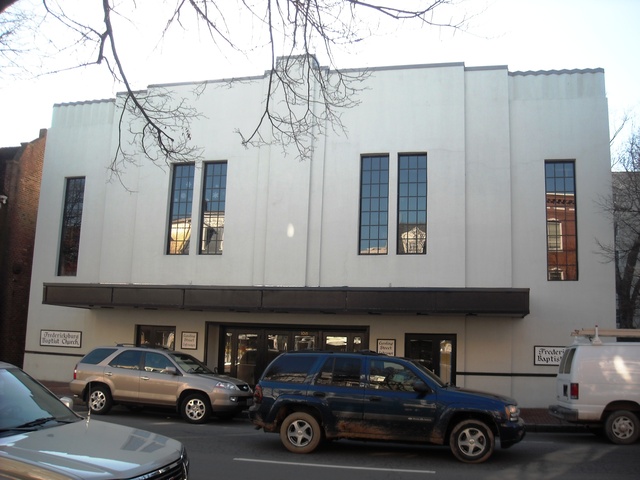 Opened in 1937, the former Victoria Theatre is now home to a church.

Walked by this hulking,massive theater today.(my wife loves trolling the cutsie shops on Caroline St.)It still looks like a theater.Been trying to get inside for years.It has a large stage house,so must have been a great place at one time.

It would play quality features then the next week book in the X -rated “MINX”.There was a Colonial Theatre there,wonder if it under went a name change?Also the city had a Drive-in too.

Pitts Theatres was headquartered in Fredericksburg, and this house most likely became the chain’s flagship when it opened. It was one of four projects that were either underway, planned, or recently completed when a story about Benjamin Pitts appeared on this page of the August 14, 1937, issue of Boxoffice.

The 1939 issue of Battlefield, the annual publication of Mary Washington College in Fredericksburg, had this courtesy ad from Pitts' Theatres, listing all of the twenty houses the chain had in operation that year.

Newspaper from 1985 has the address as 1012 Caroline St. But newspapers have been known to make mistakes.

The building most likely occupies a double lot at 1012 and 1014, so either address would be accurate.

I noticed that the copy of the Battlefield above that Joe Vogel linked to, includes three different Pitts theatres. One is called the Leader. Does anyone know anything about this theatre? I’m able to find old newspaper ads, but no address.

The 1921 Fredericksburg city directory lists Pitts Leader Theatre at 915 Main Street. This web page says that Main Street was an aka for Caroline Street, so unless the lots have been renumbered since 1921 the Leader was just a few doors down from the site of the later Colonial Theatre. The only other theater listed in 1921 was the Opera House, corner of Main and Commerce (aka William) Street.