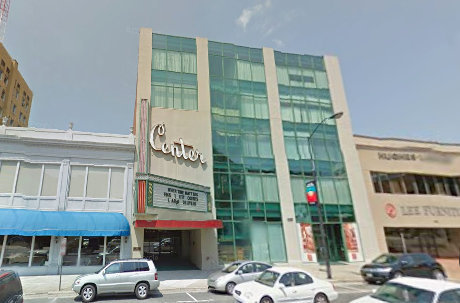 The architect was Erle Stillwell.

Continued to show first-run features and special interest films until it’s closing in 1981. At the time of it’s closing in 1981,the CENTER THEATRE was the only standing theatre in all of Downtown High Point after the Paramount and the Carolina closed.

A LOT of blockbuster films got first-run billing at this theatre. During the 1970’s and early 1980’s,the CENTER was High Point’s only Downtown Cinema.

Other movies like “CONVOY”, “SILVER STREAK”,and others played at the CENTER first-run until it’s closing in 1981.

This theatre played a lot of Elvis Presley films since they had access to the Elvis films that were released under MGM and Paramount during the 1960’s.

Last operated under Plitt Southern Theatres when it closed in early-1981.

February 7, 1956 image courtesy of Rick Surrett.
The sold out Elvis shows mentioned above in 2012.