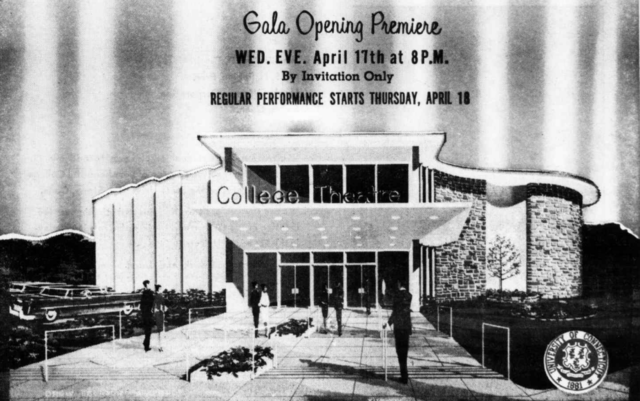 I found historic theatre attendance tallies for this theatre among others while working for the CT Film Fest on Sunday May 25, 2008. During the last screening, I self-toured the stagehouse of the Palace Theatre in Danbury on both sides and found the info.

I have been seeking an exact address for this theater for years and have, so far, come up empty-handed.

The old College Theater building still exists, though heavily modified. I used to go there in the 60’s and 70’s before it was divided onto two theaters. There was a very fancy lobby which has been removed from the front of the building. The lobby was angled and had floor to ceiling windows and a large snack counter. Beautiful rock garden landscaping too. Very high-end! The remaining building is the theater itself. Unfortunately, it has been turned into part of a retail shopping center. The address is 1244 Storrs Rd. in Storrs, CT on Google Maps. Don’t use Bing maps, it will give you the wrong location.