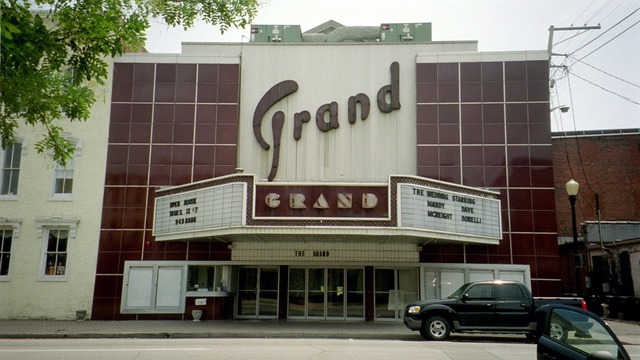 The Grand Theater opened in 1909. It was replaced by the New Grand Theater in 1913, and closed in 1975. The building is now used for weddings and other catering events, and in 2010, began screening movies again, but these have since been dropped.

The theater is now open for receptions and they are interested in possibly showing movies again if they we able to get the equipment. That is at least on a small scale so the owner told me.

The Grand Theatre that opened in 1909 was apparently replaced by this theater, originally called the New Grand when it opened in the latter part of November, 1913. The December 27, 1913, issue of Moving Picture World ran an article about the new house (click on the Page 1546 link here) with a description and a small photo. Though it now has a modern front, the gabled roof in recent photos is recognizable in the 1913 picture.

The New Grand was designed by the Louisville architectural firm of Joseph & Joseph in a restrained style. The building was faced with white and green enameled brick, and details such as classical moldings and window pediments were of galvanized iron painted to resemble stone. The theater was 60x120 feet, with a stage 25x60 feet for vaudeville and other live performances. The New Grand seated 700 on the main floor and 300 in the balcony. The article doesn’t mention an organ, but says that a four-piece orchestra was employed.

The theatre is apparently showing films again — from July 2010:
http://agilitynut.com/10/7/tgrand.jpg

Harry Switow, son of Michael Switow who built the New Grand Theatre in 1913, gave an interview to the Jefferson Reporter in 1975. The article, appearing in the March 12 edition, said that the Grand Theatre in New Albany was the last house Switow owned. At its peak, M. Switow & Sons operated 17 theaters in Kentucky and southern Indiana.