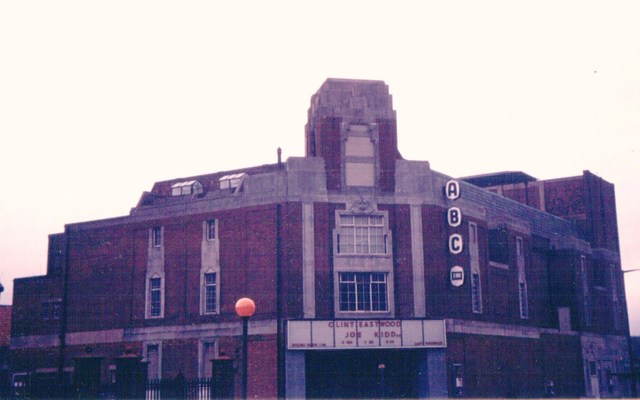 The Granada Theatre opened on 17th July 1933 with film star Anna Neagle attending in person. The opening programme was Nancy Carroll in “The Kiss Before the Mirror” and Moore Marriot in “The Hawleys of High Street”. Externally the theatre had a corner entrance which had an angular pierced tower and a large stage house at the rear. Inside the auditorium there were elegant classical figures ranged along the side-walls, which were decorated with stylised butterflys and dragonflys. This decoration extended into the foyer and cafe.

The theatre was equipped for stage shows with a fully equipped stage which was 25 feet deep and there were 5 dressing rooms. The proscenium was 45 feet wide. Film use was also included and the theatre was equipped with a Compton 2Manual/5Rank theatre organ which had an illuminated ‘cascade’ console that was opened by organist James Swift.

The GranadaTheatre was taken over by Associated British Cinemas(ABC) from 18th June 1935. It was re-furbished in 1962 and was re-named ABC on 25th May 1965. The cinema was re-furbished again in December 1970 and was given a ‘Luxury Lounge’ treatment with new seats in the stalls and new carpet. It re-opened on 24th December 1970 with Walt Disney’s “The Aristocats” playing concurrent with the Odeon Brighton. The circle seating area was closed off and not used. The ABC closed on 5th June 1974 with Edward Woodward in “Callan” when an audience of less than 50 attended the last night.

From 1975 to September 2003, the building was used as a bingo hall, initially as a Ladbrokes Bingo Club and latterly as a Gala Bingo Club. The building became vacant and plans were submitted in March 2008 to demolish and build a doctor’s surgery on the site. It was demolished in 2011.

The Theatres Trust have now have the application for demolition!
Such a shame its gone to look so neglected since that 1986 picture was taken.
It would be great to get some interior pics before it disappears.

A recent photo on the 28Dayslatter web site show the demolition of this cinema.

here is my film about the building…Latest offering from Seeded Thought Films :–) http://www.youtube.com/watch?v=p-YU8p_djgI

I should update to say I have many hours of footage and a lot of photos from inside before it was torn down.

I am sorry to hear that this building as been demolished. I worked at this theatre/cinema as a relief projectionist for EMI. It had a large stage with the dimmer board on the stage left and dressing rooms to the rear of the stage but had no fire curtian nor was there much of a fly tower.It was used as a bingo hall for some years but never paid it way and closed. It stood unuse for some years and started to fall apart, demolition was the only out come..