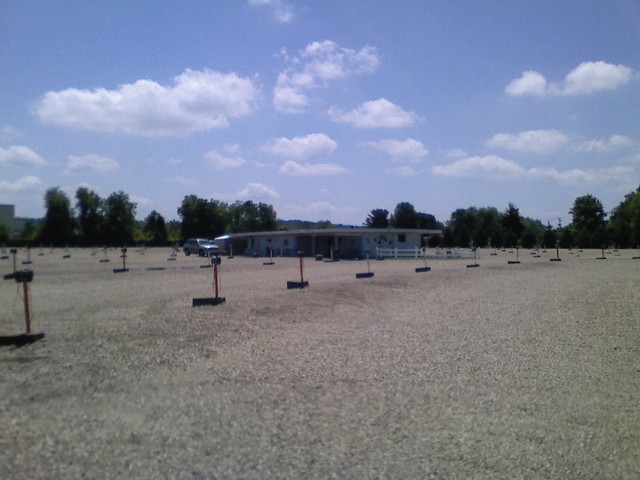 Lancaster’s Skyview Cruise-In was opened June 3, 1948 screening the 1947 adventure “Sinbad the Sailor” with Douglas Fairbanks Jr., Maureen O'Hara and Walter Slezak. It was opened by Carlos L. Crum & George Pulliam, (dba 20th Century Productions Co. Dayton, OH). Before opening the Skyview Cruise-In, Crum was a high school/college teacher for 19 years. He taught chemistry, physics and aviation. He had a masters and doctorial degrees from The Ohio State University when he left to begin his new business, drive-in theatre owner. George Pulliam was a Brown County agricultural agent. When Crum was searching for land to open his new drive-in, he flew his plane over southeast Ohio searching for just the right spot and he found it along U.S. 33. He bought the nine acres for $500 an acre. The new airer featured a 48ft x 52ft transite-covered screen and tower, with a RCA sound system with in-a-car speakers. Crum’s sister, Faye and her husband Dave Boeger, handled the concession stand and screening the features was projectionist, Gifford M. Miller. He worked full-time 1948-1978 and he passed away in December of 1996. Gladys Crum was in charge of ticket sales. In July 1954, the screen tower was enlarged to 80ft x 48ft for screening CinemaScope movies and new CinemaScope projection equipment was installed. In March of 1956, the concession stand was enlarged and modernized.

In 1965, Walt Effinger started working for Crum on and off at the Skyview Cruise-In. Starting as projectionist when he was a junior in high school he worked on and off for the next 40 years at the drive-in.

In 1970 it was renamed Skyview Drive-In. In March of 1994. the airer was sold to Walter & Cathy Effinger. When Crum wrote the sales contract it stated he was going to be the booker & buyer for the drive-in. His wife, Gladys, would continue to run the ticket booth for as long as she wanted to. She had held the position since 1950. Carlos Crum passed away in July of 1998. The need for modernization caused Effinger to install new digital projection equipment for the opening of the 2012 season. Effinger thought about doing away with individual speakers because of the expense and maintenance needed on them. Some people were upset because they wanted the nostalgia of the speakers hanging on the car window. His customers have a choice to tune the radio or use the speakers. Walt continues to maintain the high standards customers have come to expect. His wife Cathy provides quality food and excellent customer service at the concessions stand and they still use the original bun warmer from 1948 and it still works. Walt & Cathy provide quality entertainment for the whole family at very affordable prices. The Skyview Drive-In, in Lancaster, Ohio, is still showing movies under the stars.

Tlsloews.Nothing on Walk-in Theatres in my book. It carries only Drive-ins,And i never could understand why.The book is 904 pages.

The Skyview Cruise-In was built in 1948, according to the caption of its picture in the Arcadia Publishing Company book “Lancaster,” by Connie L. Rutter, Sondra Brockway Gartner.

I’m surprised it has never twined. It is nicely kept up!!

This is the correct website for the Skyview Drive-In. The drive-in has made the conversion to digital projection.

The first movie I remember seeing here was Shrek and Mr. Deeds

Although the Theatre Catalog and Motion Picture Almanacs had switched to calling it the Skyline Drive-In by 1952, its newspaper ads kept the Cruise In name going until 1970.

Here’s a nice YouTube video the Skyline produced in 2014: