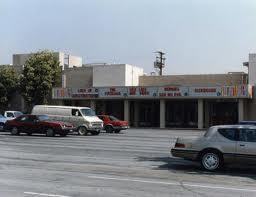 One of three indoor theaters in Montclair. The other two were Montclair Cinema on Monte Vista at Montclair Plaza and Montclair 6 on Central Avenue and San Bernardino Road.

The Montclair Theatre opened by SRO in 1967 as a 1,250 seat single screen theatre. Later taken over by Pacific Theatres, it was converted into a triple screen to the designs of architect Thomas Berkes. It later had another two screens.

LA Times ads in 1969 list the Montclair at 4377 Holt Boulevard. Whatever was at that address has now been razed, according to the map view.

According to IMDB.com,THE SONG REMAINS THE SAME was presented in 35mm 4-track stereo(magnetic prints) and Dolby Stereo(optical prints). Never in 70mm or with 6-track stereo.

I worked at this theater while I was in high school as did my brother and sister (my brother is dmann7757 above). I had just turned 15 when I was hired and could only work on staurdays and sundays until I turned 16. I worked as an usher, ticket taker, snack bar and sometimes even in the box office…I remember “tammi” listed above as a fellow montclair high student as well as being one of our box office girls. After I started working there it seemed as though many of my friends were hired as well, Tarik, Rod, Russ, Frank, we had some great times. I also did the “movie swap” on Thursday nights before the Friday primers, this included changing the letters on the marquee that was out over the sidewalk on Holt Blvd. The front marquee with show times, change out the now showing and coming attractions posters in the front and in the lobby, The box office girl would change out the movies and times on the window dosplays and the manager would record the answering machine message. To those that I worked with Mark, Bart, Big Jim, Mike, Phil, Dennis, Tarik, Rod, Russ, Karen, Kim, Julie, Wendy, Dee, Debbie and any that I have not listed…we had some fun, didn’t we?

Opening day ads of its expansion to a triplex on March 25,1977 posted in the photo section. Taken from the Los Angeles Times:

Pacific Theatres kept it as a triplex for a little while before turning it into a five screen multiplex until they eventually closed it.

THE MONTCLAIR THEATRE — My Favorite Movie Theatre when I was growing up in the Inland Empire …..

A 1968 ad for the Montclair Theatre shows the address as 4377 Holt Boulevard.