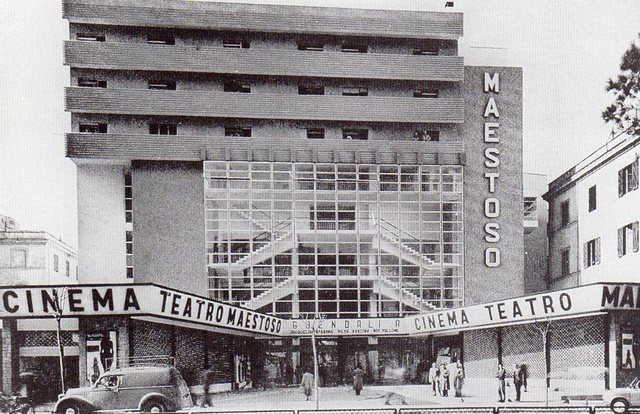 Located in the Tuscolano district, south-east of the city centre on the Piazza dell' Alberone, along the via Appia Nouva. The Cinema Teatro Maestoso was built and opened in 1957, with 2,500 seats in its single auditorium.

It was designed by architect Riccardo Morandi in an Art Moderne style, inspired by designs of American architect Joseph Urban. The building is set back slightly from the street and has three retail units on each side, the name of the cinema was originally carried along the top of the shop units, repeating itself. The actual cinema building is seven storeys in height. The facade on the first 4 levels has open glazed windows, revealing the internal stairways to the balcony levels. The top three levels are balconied apartments. The name ‘Maestoso’ is mounted vertically in large letters on the right side of the building.

In around November 2007 it had been requisitioned by the city council, but for what purpose I don’t know. It is operated by the Circuito Cinema chain and is part of the Europa Cinemas Group.

The upper section (which contains apartments) of the facade of the Cinema Teatro Maestoso, photographed with demonstrators banners in November 2007:
http://flickr.com/photos/aip/2049054565/