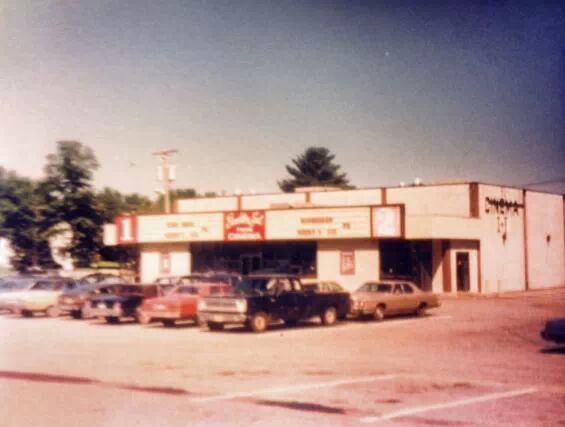 Opened as the Brockton East Twin Cinema, part of the Jerry Lewis Cinemas franchise. The theatre closed at some point in 1998, but was re-opened as the Crescent Cinema, which operated until at least 2000. It has since been reopened as the Iglesia de Jesus el Camino house of worship. Any additional information would be greatly appreciated.

This theater was open in the year 2000 under the name Crescent Cinema. It was owned by CMCI, a subsidiary of the larger Boston Concessions Group. I was the general manager of the theater for a short time. I know that a couple of companies had owned the theater prior to BCG, none of which had any success. Shortly after I left, BCG sold the theater.
-Sarah Peter

Thank you, Sarah Peter. Crescent Cinema was I believe this theatre’s second (and last) lease on life, after the Brockton East Cinema as we know it closed in 1998.

The cinema opened as the Brockton East Twin Cinema (can’t say exactly when as I was too young – but from my memory it goes back to at least 1979, where I saw the Chuck Norris classic A Force Of One there with childhood pals). It was largely a second-run cinema through much of its life, but did occasionally show a first-run film now and again. And not just B-movie stuff; Disney, Universal and Columbia would sometimes book a first-run feature there. I should clarify at this point however that when BCG ran Crescent theatres, it was exclusively first-run.

This cinema actually occupied two distinct lots at one time or another. The first building was where the original twin screen complex was located, inside the small boxy white building across from where the church is now. It has long been abandoned but as of this writing still stands. Sometime around 1983-84, the cinema took over an abandoned Bradlees in the strip mall next door (where the cinema would more or less remain from now on) and opened three additional screens there, bringing its total to five. Shortly thereafter (late 80s), the cinema closed the “twinplex” and twinned the remaining three screens, bringing its final total to six.

I heard that at one time this cinema was owned by Christo’s, a nearby family restaurant and function hall known for its famous Greek salad (and not to be confused with the Minnesota-based chain of Greek restaurants with the same name). I couldn’t confirm this, but I remember during the 70s and 80s ads for Christo’s did run before the feature, leading me to believe it may have been true at some point.

This cinema is far from the best theatre I’ve been in. It wasn’t an ornate palace, it had shoebox auditoriums (particularly later in its life), and lacked many of the amenities you’d find in bigger chain theatres. But I loved it anyway as it had a good selection of movies, was conveniently located (especially since I rode a scooter much of the time) and it remains a fond memory.

This theater began life as a Jerry Lewis Theater. After the company found out that the owners were showing “R” rated movies, they pulled the Jerry Lewis name but theater stayed open.

Saw a number of films there in my youth. The theater later expanded to an additional 6 screens by having space in the strip plaza across the lot. The original building was sold and has been office space, while the expansion is now owned by Dominion Church.

Bradlees was across the street, not next door