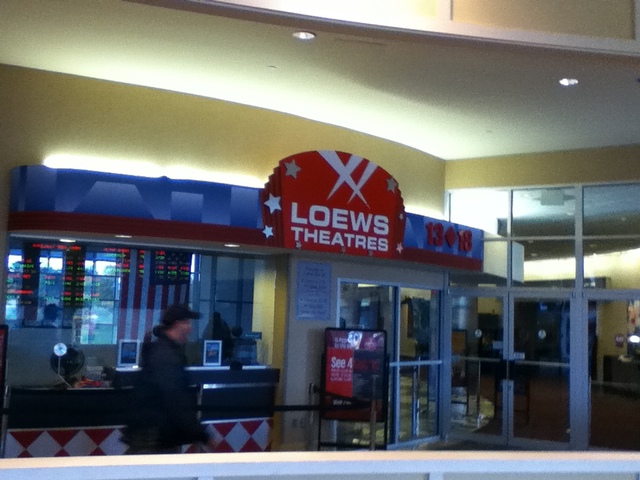 Opened in the late-1980’s or early-1990’s, this theatre is part of the massive Rio Centre and Washingtonian Center Complex. Screens 1-9 are on the first floor, while screens 10-18 are on the second floor, which can only be accessed by Rio Centre elevators, escalators, and stairs. There are concession stands on both floors, and also many restaurants in the theatre building. Screen 18 is now a Prine at AMC auditorium.

Any photos or more info out there?

Here is a lake view of the Rio complex.

Thanks for the photo.

A correction to the above profile: Theatres 1-12 are on the 1st floor and 13-18 are upstairs. Theatres 1 & 2 used to be one big auditorium but were split when Loews took over from Cineplex Odeon. Rio originally opened in 1989 to my knowledge.

The IMAX-Digital was supposed to open with the release of ‘Pirates of the Caribeean: On Stranger Tides’ last Friday, but will open on May 27th (if all goes to plan) The IMAX system will debut on the largest screen: auditorium #17

After several delays, Rio should unveil it’s new IMAX screen next Friday, 6/17/11 for week 2 of Super 8.

was here today for a screening of ‘Titanic’ (IMAX-Digital 3D) and I have to say the volume level is overpowering and not in a good way. The screen is on the small side, so someone must have thought to ‘up’ the IMAX experience it was necessary to amp the sound – well… it doesn’t help. The auditorium here is too small for the volume to be THIS loud – it’s borderline unacceptable.

this is the complex' largest auditorium?? I remember a larger one downstairs when I saw Spielberg’s “A.I.” (it must have been the single auditorium that was split to become #1 and #2)

I haven’t been here in years, but having now seen two movies here as of last week; nearly the whole building and theater complex is getting a much needed makeover. The downstairs auditoriums have been renovated and as of writing this up, all the upstairs ones are closed and getting renovated as well. Speaking with one of the managers, he informed me that one of the theaters will become a ‘Prime’ auditoriums with a Dolby Atmos sound system – no plans to add Dolby Cinema. The new recliners while not as tacky as the one’s at Shirlington (those nearly resemble beds when fully reclined) are comfortable and are a darker leather, the one caveat is that they have mini sliding tables which in my opinion are more of a distraction and add a slight discomfort than convenience.

Auditorium 18 has reopened as a large format “Prime at AMC” auditorium with Dolby Atmos and recliners with seat transducers. Not sure what projectors they use for the “2nd generation” Prime auditoriums but from what I’ve seen at other “new” Prime locations, the picture quality looks better than IMAX Digital 2K (xenon projectors).

I’m curious to know whether IMAX is installing their new multiplex laser system (single IMAX laser projector, instead of the dual laser projectors of the GT Laser system) and 12-channel sound system into the IMAX auditorium.

Like many other former Loews locations, AMC has dropped the “Loews” branding from its name and also turned this location into an AMC Dine-In, resulting in the new name “AMC Dine-In Rio Cinemas 18”.

^ to answer your question regarding the projectors for the Prime auditorium, there are two Christie 4K projectors. The manager told me they can present 3D features, yet for ‘Spider-Man: Into the Spider-Verse’ I saw today, it was 2D. As to the sound ~ wow! color me impressed (far better than what is calibrated and presented at Tysons).

He also told me that the 12-channel sound system is already implemented and installed in the IMAX auditorium but the changeover to laser, won’t happen til after ‘Captain Marvel’ but in time for ‘Avenger’s Endgame (April 26th).