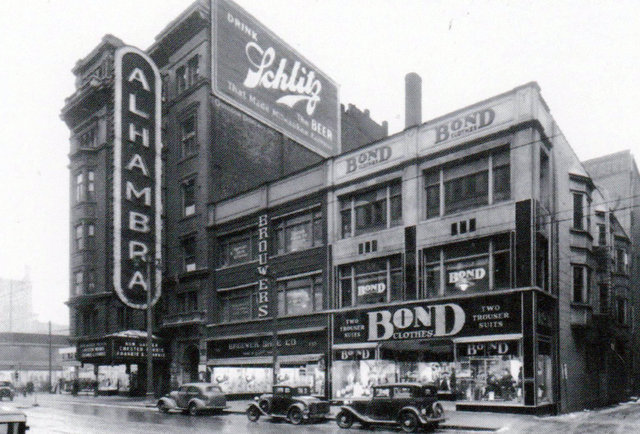 ‘Alhambra,’ a name from antiquity which came to summarize all that was exotic and opulent, it now designates any number of theaters of supposed opulence in many lands. The original Alhambra is a Moorish palace at Granada, Spain, known for its interior of lacy ornamentation supported by spindly columns.

That exotic design may have inspired the name of Milwaukee’s Alhambra Theater, but that structure was far too massive and solid (as required by a northern climate) to ever begin to emulate the exotic original. No, Milwaukee’s Alhambra was one in name only, and that apparently due to finding out that the name it opened with, the Uihlein (pronounced: EE-line) theater, was too awkward for visitors to pronounce. The Uihleins were the family that then owned the Schlitz brewery and they built more than one theater in the city, but none of them with a moniker as exotic as the ‘Alhambra’ of 1896!

In a northern city of ultra conservative German Socialist attitudes it was audacious to name even a handsome theatre such, and the Alhambra was indeed handsome as so characterized by that pioneer writer about movie palaces, the late Ben M. Hall. In his landmark book, "The Best Remaining Seats: The Story Of The Golden Age Of The Movie Palace," (1961). Mr. Hall describes the workings of a famous name in theatres, "Roxy" Rothafel, who came to the Alhambra in 1911 to lift it from its rut of classy vaudeville, plays and touring artists, to, of all things, movies, or ‘photoplays’ as they were then known.

He didn’t alter the ‘Adamesque’ styled interior of almost 3000 seats on three levels with 18 luxurious boxes flanking the spacious stage, but merely replaced the carpets and draperies and covered the orchestra pit with potted palms since he was going to place the musicians upon the stage below the very first movie screen to be installed there. His trademark techniques were a financial and artistic success and shortly thereafter the burgeoning local movie house chain, Saxe A.E., bought control of the theater.

The Uihleins paid over ½-million dollars in 1896 and therefore also got a seven-story brick office building above the foyer and lobby of the theatre with such unusual features as a special room on the second floor where the elevators brought one to the "Bicycle Park," a nod to the turn-or-the-century craze of biking.

Carried to the roof, one found a brick and limestone penthouse containing a spacious photographic studio with high windows allowing sunlight to pour in to develop by sunlight exposure the photography of the day with its glass plate negatives.

The original Adam style inspired interior was in cream and gold with deep red velour and plush draperies, all visible by means of 4,000 (!) light bulbs as both stud lights and in fixtures (one must remember that the light bulbs of that day were of carbon filaments and therefore exuded a much dimmer and more reddish light, hence 4,000 bulbs would not be the assumed glare that they would be today with tungsten filaments).

The walls were then adorned with paintings of classic vaudeville acts and personalities of the stage, but these disappeared during Roxy’s re-do. The local architect of the Alhambra, Charles Kirchoff, would later team with Thomas Rose and give Milwaukee some other fine theatres: the American, Colonial, Crystal, Garden, Majestic, New Star, Palace, Rialto, and the Riverside, but all this was after their Palace Theater in New York City, now gone.

Mr. Kirchoff designed a 27 by 100-ft. stage with a 43-foot-wide proscenium opening under the gentle curve of the arch, the style of which he described as "modernized renaissance." He also acknowledged the owner’s business by incorporating no less than four beer bars into the theatre to slake the thirst of then Germanic Milwaukeeans used to the beer halls of their native Germany, for their hometown specialty - Schlitz brand, of course!

The Alhambra Theater was taken over by the Universal Picture chain in June 1925. Prohibition put an end to the bars, but by 1934 during the Great Depression, a desperate measure was used to lure people back into the cavernous theatre: a new beer bar was installed at the back of the house and the orchestra pit was floored over to allow dancing near the stage.

Things were a rough go for the Alhambra Theater from then on. Warner Bros. Theatres had succeeded the Saxes in controlling the theater, but as opulent movie palaces came on the scene and, finally, television, its days of profitability were ending. People were moving to the suburbs and few came downtown anymore. The Joseph Schlitz brewery still owned the theatre, but found itself putting more money into upkeep than it ever got in rents.

They secretly negotiated with two men from Chicago who promised to build a high rise hotel/office building there, but the city was skeptical and dragged its feet in granting permits. Finally the aged show house came down in 1961.

Never again would one sit in the "handsome" house and listen to its latter day theatre pipe organ, a two manual, six rank Wurlitzer.

A sign appeared on the large cleared lot in 1962 proclaiming a new high rise building soon to start construction. This writer recalls often being on the corner of 4th and Wis. Ave. as he watched the paint fade from the sign, the boards slowly fall away over the years and finally only a post remained standing until the 1980’s when it became part of the site of a new federal office building.

It turns out that law suits against the defunct would-be developers and probate of the dozens of Uihlein heirs had tied it up in the courts for years. The rooftop photography studio had been unneeded with the new celluloid films and few people used the "Bike Park" room since few rode bicycles on a downtown main street clogged with cars and busses. Likewise, few people remembered what the Alhambra Theater had looked like in its glory days and the younger generation could not even be bothered to learn of the original Alhambra in Spain, much less this local monument to some days of glory in their city’s past.

The Alhambra was a money maker for Warner Theaters. They usally offered action Bs and reissuses. During the 50s with the stiff competition from televison and blockbusters at the other downtown houses, The Alhambra alwaus had a crowd. Randolph Scott, Audie Murphy and Warner gangster reissuses were shown often. The upper balcony was always filled with sailors from The Great Lakes Naval Base and their Milwaukee girl friends.
TheAlhambra did show some big pictures. Laurence Olivier"s Hamlet played a road show engagement. Streetcar Named Desire and Life with Father also were road show engagements.

There is a photo of the Alhambra on this page:
http://tinyurl.com/3cdy7k

A little more on that Mighty WurliTizer Theater Pipe Organ, Opus 1261, a 2/6, manual/ranks, keyboards/sets of pipes. It was shipped (not installed) the 637 miles from North Tonawanda, New York, on January 30, 1926. It had a curved console, 450 pipes, 4 tuned percussions and 20 traps (sound effects on the toy counter). It was sold to Our Lady of Good Hope Church in Milwaukee and then sold to someone 65 miles South in Riverwoods, Illinois and it is “OK”. Anyone know anything else?

I was only 11 when the Alhambra was torn down but for some reason my love for old buildings had begun to blossom and I still remember how sad it made me to see the a slice through the theater, exposing what had been its lovely interior.