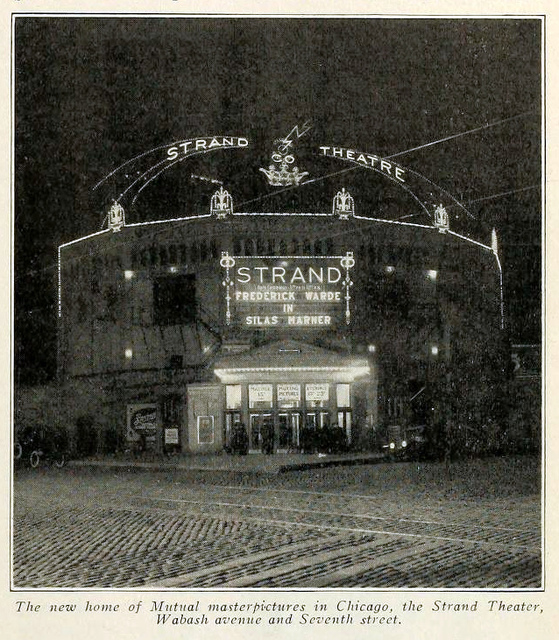 The Strand Theatre is perhaps one of Chicago’s most fascinating almost-forgotten theaters.

The building started life in 1885 as the National Panorama. Built by architects Bauer and Hill at S. Wabash Avenue and Hubbard Court (later Panorama Place, 7th Street, and Balbo Drive) for Eugene Davids and Eugene Marlier of Brussels, Belgium, the building’s most striking initial feature was that it was almost circular, a 16-sided polygon, with a 135-foot diameter. It had a wrought iron frame and a dome roof topped in a cupola, 96 feet tall at its apex. The foyer was initially at the corner and tiled, which led to a narrow, winding passageway to the center of the building (a fire hazard), where a spiral staircase led to a 40-foot circular platform, from which patrons could view a giant 400'x45' canvas panorama of the Battle of Gettysburg on July 3, 1863, painted by Paul Philippoteaux of Paris (allegedly taking two years), giving the impression that they were in the midst of the scene. It opened in October, 1883.

The building cost $110,000 to construct, which was recouped almost immediately in stock, because the Panorama was a big hit despite many naysayers during its construction. Two months after opening, the managers office was enlarged into a ladies parlor and toilet room, lit by a new bay window and stained glass. A similar addition was made on the other side of the entrance, and between that a new elaborate outer vestibule was built. Better lighting was added to the passageways. The building’s success was such that a competing American Panorama showing the Siege of Paris was opened just across the street 6 months later. In 1885, the World Panorama was erected on the Southwest corner of Wabash and Peck Court (8th St), and a Battle of Shiloh panorama was installed on Michigan. In 1890, management announced that the Gettysburg Panorama would close for at least 18 months effective July 1, 1890 to prepare for the World’s Fair of 1893. The panorama finally closed for good in 1895.

Subsequently, it went into use as the Seventh Regiment Armory and doubled as a venue for Illinois Athletic Club boxing.

On September 2, it was announced that the vacated Armory would quickly turn over to popular plays and vaudeville by the W.S. Cleveland Amusement Company. Less than two months later, to plans by Oscar Cobb, Cleveland’s New Theater opened October 31, 1903. The first play there was "Magda" featuring a 21 year old actor named John Barrymore making his stage debut in a tiny role. This play ran for a grand total of eight days. Critics remarked that in constructing a theater within a round building, the acoustics managed to be such that words were effectively repeated. Will Rogers also made his vaudeville debut there on October 23, 1904.

It was renamed the International Theater in 1906 with somewhat improved facilities, primarily featuring concerts and Grand Opera (presumably the acoustics had been addressed somewhat by this point). Ellis Glickman was the operator at this point. It was shut down in April 1909 due to persistent fire code violations.

In July 1909, it was announced that it would reopen in mid-August following extensive renovations, both structural and aesthetic, as the Globe Theater. Operators were Stair and Havlin, and the programming was melodrama, comedy, and musical plays.

In July, 1911 it briefly became the Angelus Opera House, playing popular opera. It then reverted to the Globe name, playing anything from wrestling to Mutt and Jeff.

In 1915 it was converted into the "temple" for Pastor Russell who used the building for filmed sermons.

On October, 1915, it became the Strand Theatre after that name and management moved over from Orchestra Hall. It was extensively redecorated to fit the high Strand standards. After about a year of this, it switched to an inclusive policy of most of the forms of entertainment that had previously occupied it. It was demolished in 1921 to make way for a two story building with two Masonic lodge halls.

I am writing the first book from the American point of view about 19th century rotunda panoramas. These were the biggest paintings in the world, 50 x 400=20,000 square feet, housed in their own rotundas which were 16-sided polygons. Chicago in 1893 had 6 panorama companies and 6 panorama rotundas. INFO TO SHARE Gene Meier 1160 Bailey Road, Sycamore, Illinois 60178 815 895 4099

May 1, 1915 was the start of the Strand Theatre operation. Ad posted in photos along with new look stage.

Author’s description of 1915 tenants is wholly inaccurate. 1. Russell wasn’t part of a “cult” 2. He didn’t become rich nationwide, he gave away his money that he had made in a previous business. 3. He didn’t preach doomsday in the “filmed sermon”, he preached hope for the future and good news. He also didn’t charge for the “filmed sermons”. It was completely free to the public. Nice research job, though!