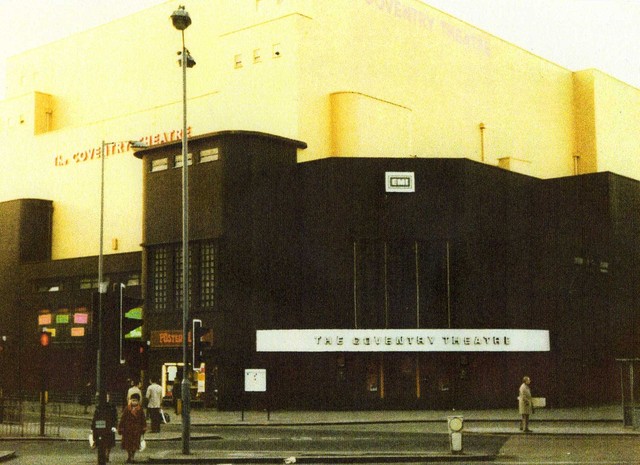 Building of the ‘New Hippodrome Theatre’ commenced in December 1936 and was designed in the Art Deco style by the local Coventry architectural firm W. Stanley Hattrell & Partners. Seating was provided for 1,014 in the stalls, 640 in the dress circle and 462 in the upper circle and 20 in the two boxes located each side of the proscenium. The proscenium was 50 feet wide, the stage 39 feet deep and there were twelve dressing rooms.

It was the idea of impresario Sam H. Newsome to build his New Hippodrome Theatre and it opened on 1st November 1937, the day after the second Hippodrome closed. Harry Roy and His Band were on the opening bill. Sam H. Newsome was to become famous for his spectacular Spring Shows, Birthday Shows (in the Autumn seasons) and his Pantomimes, which were also presented at theatres in other cities on following pantomime seasons. The New Hippodrome Theatre soon became known as ‘The Showplace Of The Midlands’ and all the famous music hall, radio and TV stars of the day appeared in his shows, along with regular visits from The D'Oyly Carte Opera, Sadlers Wells Opera, pre-and-post London tours etc. In 1955 the theatre was renamed the Coventry Theatre. By 1958 it was an associated theatre in the Stoll Circuit.

In October 1967, Sam Newsome sold out to the Grade Organisation and in turn it passed into the EMI Company and Bernard Delfont presented many of his shows there. Films were screened at the Coventry Theatre during the summer months from 1969 to 1975 when stage shows were thin on the ground. It was equipped with 70mm projectors and the 70mm version of “Gone With the Wind” was screened for nine weeks from June 1969, which was followed by “Dr Zhivago” presented in 70mm. In 1979 it was taken over by Paul Gregg’s Apollo Theatre Company and subsequently its name changed again to the Coventry Apollo.

Unfortunately by this time, another famous Hippodrome Theatre, the Birmingham Hippodrome began to attract all the big shows and Coventry seemed to get passed by, except for the many ‘pop’ concerts which Apollo presented. Apollo eventually gave in and following a ‘sell-out’ concert by Barbara Dickson on 6th June 1985, it became a Granada Bingo Club, later becoming the Gala Bingo Club.

It was compulsary purchased by Coventry City Council in 2000 and demolished in 2002 to make way for Millenium Place.

The Coventry Theatre was not a startling building architectually outside, it resembled an almost windowless stucco-faced box. There were three Art Deco style relief female figures over the corner entrance. The interior was a simple Art Deco style, with troughs across the ceiling at the proscenium, which contained concealed lighting.

The Coventry Hippodrome Theatre has left its legacy in the memories of stage presentations that were theatrical history, never to be repeated.

Photographs, memorabilia and more details on the Hippodrome Theatre:
http://www.arthurlloyd.co.uk/Coventry.htm