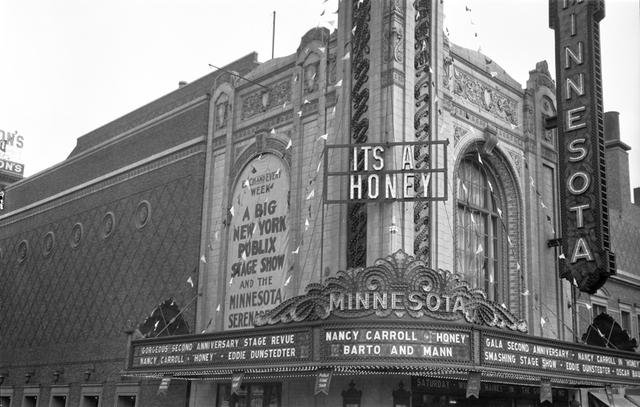 The Minnesota Theater opened March 24 1928 with Richard Dix in “Sporting Goods”. The Wurlitzer 4 manual 20 ranks organ was opened by organist Eddie Dunstedter. It was, at the time, the fifth largest theater in the country, with seating for over 4,000 in the huge auditorium.

It was designed by the Chicago-based firm of Graven & Mayger in the French Renaissance style. This firm also designed the Alabama Theater in Birmingham, Alabama and the Tennessee Theatre in Knoxville, Tennessee among many others.

The three-story grand lobby was based upon the Sainte-Chappelle at Versailles, and contained a large marble staircase, rows of Corinthian columns with gilded capitals, and on the mezzanine, a grand piano played while patrons waited under an enormous crystal chandelier for the show to start.

The auditorium was even more impressive, with a large stage and a soaring proscenium arch decorated with intricate plasterwork. The ceiling was cove-lit, and the side walls also covered with gilded plasterwork. Sets of smaller chandeliers hung from the ceiling.

The seats on the main floor and balcony were upholstered with velvet. Antique paintings and sculptures filled many of the public areas.

The exterior of the Minnesota Theater was the piece-de-resistance, its façade coated in various shades of white terra cotta, and topped by a spectacular domed tower at the theater’s corner entrance, with decorative polychromed terra cotta floral patterns all the way down its side. These were traced by lighting and illuminated at night, as was the dome.

The vertical marquee was eight stories tall, spelling out the theater’s name in huge white letters. The marquee over the main entrance was equally ornate, wrapping around the corner of the building, forming a triangular shape. Like the terra cotta on the tower above it, it echoed the floral pattern shape in its neon signage. The word ‘Minnesota’ was encircled by a stylized fleur-de-lys pattern, in shades of green and yellow.

Not long after the Minnesota Theater opened, the Depression began, and the theater began a roller-coaster ride of closings and reopenings that would last throughout the 1930’s and into the start of the 1940’s.

Despite this, it featured elaborate stage reviews, vaudeville acts, and motion pictures. In 1941, Disney’s "Fantasia" had its premiere at the Minnesota Theater, and ran for much of that year. However, once Disney left, the theater once again was closed.

It reopened yet again in 1944, however, renamed the Radio City Theater, after its new owner, radio station KSTP AM 1500, and continued to screen movies. Its original gorgeous signage, sadly, was removed, and replaced with a much less ornate, though still stylish, Streamline Moderne style marquee.

On October 14, 1958, the Radio City Theater closed and the auditorium portion of the building was demolished. The Wurlitzer organ was saved and is now installed in a private residence. The remaining section of the theater converted into television studios for years (though no longer used for this purpose, it is still standing and is use today). A parking lot and tire store were built on the site of the auditorium. Later, the parking lot became part of LaSalle Court (now Highland Bank Court).

WilliamMcQuade, the remaining part of the building that was the lobby is now KSTP Television; none of the original interior is intact. However, if you go to the following link and scroll through to the end, you can see the remnant of the theater exterior visible through the larger (third?) story window, at www.lileks.com/mpls/mntheat/index.html.

The remaining portion of the theater was the home of WCCO-TV/4 until the station moved to 11th & Nicollet in 1983, after which the structure was converted to office space. KSTP-TV was never located here.

Click here for an exterior view of the Minnesota Theatre in 1930.

and the photo section.

Poking around the Radio City theatre

“Paramount has closed the 4,024-seat Minnesota Theater, Minneapolis, and will not reopen it, John Friedl, president of the Minnesota Amusement Co., Paramount affiliate, stated yesterday in New York. House closed Thursday night. Lease on the theater does not expire until next February but under the terms of the agreement, Paramount was not obliged to operate it more than six months of any calendar year.

“It is not likely that any other company will take the Minnesota over because of the high overhead; house was built before Minneapolis was ready for such a theater, it was said.”If Paramount’s lease was ending until February, 1939 and the house opened in March of 1928, it seems unlikely that they were the original operators of the Minnesota. I’ve never heard of anyone taking an eleven year lease on a theater.