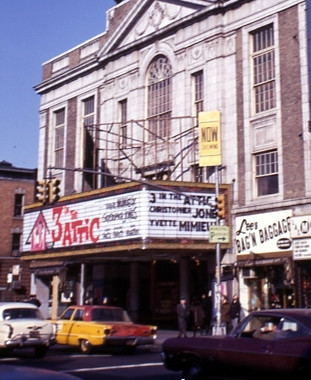 Opened as the Albemarle Theatre on March 17, 1921 presenting vaudeville and Fox pictures. Initially it was not a success. It was still an excellent place to see event films in the 1970’s like “Star Trek: The Motion Picture” and played host to most of the horror movies of the early-1980’s like “Creepshow”.

In late-1984, at a time when there were few single screen cinemas left in Brooklyn, the Albemarle Theatre closed its doors due to a fire. One of the last feature presentations at the time was “Friday the 13th IV: The Final Chapter”.

The building, which also housed a grand banquet hall above the auditorium with an entrance on the side, was partially damaged in the the fire. It was able to be refurbished after laying dormant for a few months when it was purchased by the Jehovah’s Witnesses and became a Kingdom Hall.

The old marquee remained for several years – as did the advertisement in the old box office of “Creepshow” – but over the years with further renovations saw the marquee remodeled and no sign really today of it ever being a movie palace.

My father owned a record store to the right of this theater from 1965-1973. (L.A.S. Music) As a child when accompanying my dad to work on Saturdays, it was easy to walk next door an see a movie. Experiencing 2001: A Space Odyssey in 1969 was memorable.

They must have turned it around somehow. It lasted until the fire in 1984 as a single screen theater. Don’t know what it looked like “in the day”, but the pictures of the auditorium as a church (elsewhere on this site) show a spectacular space.

I am trying to search closed theatres in Brooklyn and the site will now only give me open theatres. Do I need to change my settings?

I found the menu below the map to select open, closed, demolished etc. nice improvement. Thanks

If spring 1921 was the time of the Albemarle’s opening, then the Variety piece you copied from April 22, 1921, seems a pretty snap rush to judgment on the lack of success for the venue.

My mistake. The photo is dated January 19, 1921, and refers to the theatre opening the following month. So, by April 22, Variety had in the neighborhood of two full months worth of box office figures by which to judge its success. The photo caption also refers to the theatre as the “Albemarle Palace,” suggesting this may have been the name under which it opened.

In two months, this building will be 94 years old. Yes, Flatbush is very lucky to have three theatres in a row
that are still intact. That’s why I decided to make it my home again. The best of all, Kings Theatre, one of the three will be the neighborhood’s living room again.

Which is the third?

Albemarle Palace was the name of the ballroom above the lobbies and opened before the theatre.

I was an usher at the Albemarle in the summer of 1963, my first real job as a teenager after my sophomore year at Erasmus (and we just had our 50th year reunion, fascinating). The Albermarle was a barn, and had not been reconditioned for air conditioning. We had many walkouts that summer due to the heat, and we were told to tell the customers, when they asked, that the theatre was “air cooled,” which really meant we left as many doors open as possible! Those heavy wool uniforms we had to wear were murder! At the end of the summer, Century Theatres, which had owned it, sold it to another company, and my job came to an end (when I went on to work at the Nostrand for a year or two, and then finally at the RKO Kenmore, a story in itself).