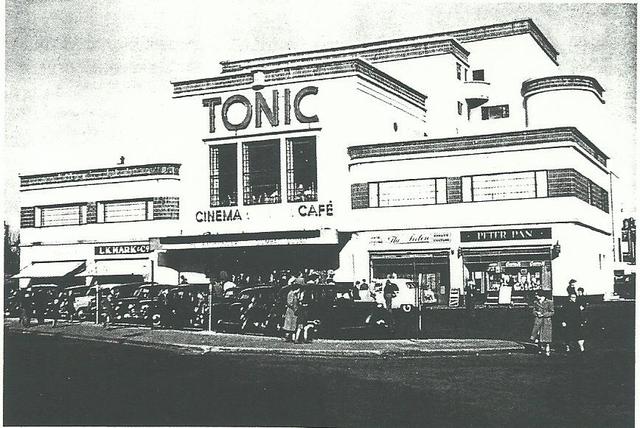 The Tonic Cinema opened in 1936 with Ronald Colman in “The Man Who Broke the Bank at Monte Carlo”. It was operated by John H. O'Niell.

It had a 49 feet wide proscenium, a stage 25 feet deep and five dressing rooms. The Tonic Cinema was equipped with a Compton 3Manual/8Rank theatre organ, with Melotone attachment, which was installed on 6th July 1936. It also had a restaurant and a ballroom attached.

Frome November 1936 it was under the management of Bangor Cinemas Ltd. and booked by Curran Theatres. They operated it at least December 1956 when it was taken over by Odeon (Northern Ireland) Ltd. The Compton organ was sold for 150 GB Pounds and removed in 1969 to a Bangor boys school. The Rank Organisation pulled out of Northern Ireland in 1974 and an independent company Belfast Cinemas Ltd. took control. It was still being operated by them as a single screen cinema in 1980, but was closed on 29th October 1983.

The empty building was designated a Grade II Listed building. In February 1992, an application was made to de-list the (by then) derelict cinema, to enable demolition for a sheltered housing project to be built. The derelict building was severely damaged by a fire on 21st June 1992 and it was demolished a few weeks later.

The Tonic had been a Landmark building for many years, however the local Council had made plans.They firstly removed its historical listing.Then, a mysterious fire which actually failed to totally destroy the building. Refusing to be beaten, the Council reported in the local paper that “concrete sickness” had been found and The Tonic’s fate had been sealed. This is not unusual behaviour for the Council.The Grand Hotel or Barry’s Amusements as it had become, met a similar fate with a fire then demolition under strange circumstances.All we can do is mourn these Great buildings as we are powerless to save them.

Stevelaw. We have a similar council in Liverpool.

According to ‘Bangor An Historical Gazetteer’ (by Marcus Patton, UAHS, 1999), John O'Neill founded the Tonic Bus Service (which ran from Bangor to Donaghadee). Having sold the business to the N I Road Transport Board, he invested the anticipated proceeds in a cinema, named after his bus service; the cinema cost £76,000. It has been described as the finest example of cinema architecture in the province and at the time of opening was the second largest on the island of Ireland.

Within a few months of opening the Tonic, John O'Neill got into financial difficulties and had to sell his beloved cinema. The new owner, from November 1936, was Curran Theatres, one of the leading locally owned chains. By December 1956 it had become part of Odeon (Northern Ireland) Ltd. It was not until 3rd March 1969, however, that the Tonic name was dropped in favour of Odeon. In November 1974 it passed into local ownership again, this time as part of Belfast Cinemas Ltd. Around 7th March 1975 it reverted to the Tonic name and it remained that way until its closure on 29th October 1983.

Maybe that council should be investigated?