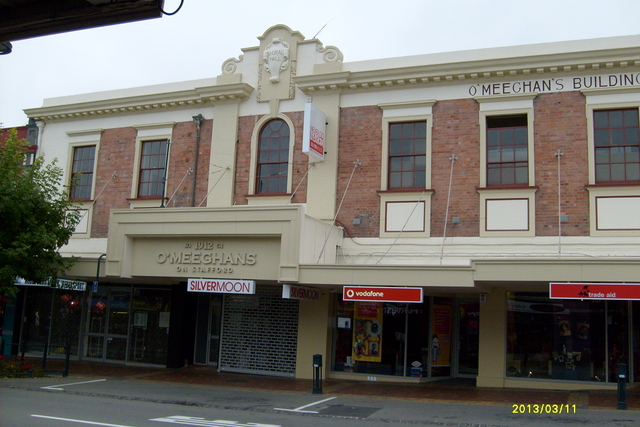 The Grand Cinema opened on December 8, 1915. It was the third cinema for Timaru. The others were Haywards Lyceum (later Majestic) and Fullers Theatre Royal. The cinema was built within the O'Callaghan and Le Crens mart in a block then known as the Choral Hall buildings.

It was erected for the Timaru Continuous Picture Company by Mr H.T. Pring under the direction of a local architect, Mr J.S. Turnball. The cinema measured 84 feet by 24 feet, and was packed on opening night. It was described as a magnificent addition to the movie world in Timaru. The first films to be screened included "His New Job" featuring Charlie Chaplin, "The Midnight Mall" described as a powerful drama, "The Harbour of Love" and "Wheels Within Wheels". There were two sessions nightly at 7pm and 8.30 pm with admission prices at 1s (dress circle) and 6d (stalls).

For several years the Grand Cinema screened continuous programmes, then in May 1931 it was closed for "an indefinite period". Although no reason was given, it is believed that it was for a makeover, as on June 26, 1931, it was reopened as the Regent Theatre. Until the advent of television the Regent Theatre enjoyed a fair share of filmgoers. In 1964 was refurbished.

However the end came for the Regent Theatre on Saturday September 16, 1967 when its owners, Kerridge Odeon closed the cinema. Its last film was "Doctor Blood’s Coffin". After the film ended staff quickly removed posters and stock from the Sweet Stall was transfered to the Majestic Cinema.

The Regent Theatre was demolished in 2007.

Only the auditorium has been demolished.