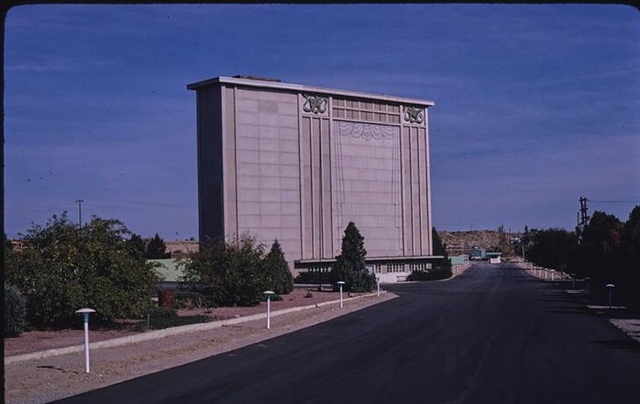 The Pueblo Drive-In was opened on May 20, 1948 and was operated by Lionel Semon who also operated the slightly smaller Lake Drive-In from 1949. It was located on Canon City Highway. It closed on September 4, 1988 and its screen tower was destroyed by fire on November 7, 1995. It had a capacity for 725 cars.

The Lake Drive-in was located off I-25 at Lake Ave in Pueblo, CO

An Lowe’s now stands on the site of the drive-in which is at 1225 Highway 50 West. An USGS aerial photo is uploaded

A more accurate address (at least for Google) is 1225 U.S. 50, Pueblo, CO. A Lowe’s currently sits on the property with no trace of the drive-in remaining. http://tinyurl.com/z3azzqx

But that just proves that some reporter got suckered by a season re-opening ad and didn’t read the book, which is admittedly hard to find. In Night Lights, Thomason clearly wrote that the Pueblo opened on May 20, 1948, closed on Sept. 4, 1988, and saw its screen tower burn down on Nov. 7, 1995.

Is it known how the fire in the screen tower started?

Boxoffice, Jan. 3, 1948: “Work has begun on the new drive-in theatre being built by the Pueblo Drive-In Theatre Co. in Pueblo. Dave Pitman, Pueblo builder, has the contract for the screen tower and concession stand, which were designed by Walter DeMordaunt. The theatre will be ready for operation in the spring.”