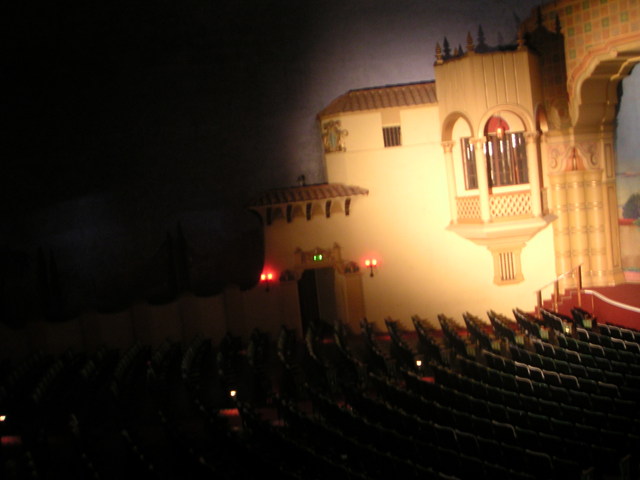 Even in Hanford, front page coverage of the December 1929 Grand Opening of the Fox Theatre dominated the Christmas holiday news. Built by William Fox of Fox Theatres in 1929, and one of 800 across the United States, the Hanford Fox Theatre is designed as an Atmospheric theatre. This type of theatre, as opposed to the ornate or Art Deco style, is designed to create the illusion of being located in a romantic far-off place. The locale is a Spanish courtyard, complete with twinkling stars and crescent moon in a dark night sky. There are tile covered buildings with lighted windows, balconies and turrets, silhouetted and backlighted by the glow of a village beyond. In the shadows rise mountains covered with cypress and palm trees. Greco-Roman columns support the proscenium. Further back are Mediteranian and Spanish Renaissance influences, but the over all decor is Mission Revival. Very eclectic, yet appropriate.

Each theatre was required to have a fire-proof screen to separate backstage from the audience. The architects designed them to be painted with a large mural incorporating the theme of the auditorium. The Hanford Theatre’s screen depicts a Spanish village with church bell tower, cypress trees, and terra cotta roofed buildings. It is a magnificent oil painting filling the entire stage opening.

The designers of the early theatres included a full stage, dressing rooms, fly and orchestra pit in their plans, because vaudeville was still very much in vogue and movies had not dominated the entertainment scene. Traveling troupes crisss-crossed the United States exhibiting their acts for an entertainment starved nation. Then, the genius of the motion picture pioneers developed a frame-lined celluloid film and put pictures into motion. William Fox himself, viewed the moving picture flicks as a passing fad. But the public’s interest was caught and their fascination grew. Vaudeville soon shared the stage with the movie screen. Acts such as Laurel and Hardy bowed to curtain calls as they visited the theaters during a premiere of their latest film. A new industry developed rapidly, as people swarmed into the theatres.

The orchestra pits were used to provide space for full orchestras, and later it housed a pipe organ console. The Hanford Fox Theatre had these facilities and pipe organ music was a normal form of music appreciation for the audience to enjoy during silent films or intermission music. Orchestra music was used when live stage events occurred.

Just as movies supplanted vaudeville in popularity after World War I, television in everyone’s living room reduced box office admissions dramatically after World War II. To cope economically, the movie houses and palaces were torn down, or altered for other uses. Some were twinned or triplexed (the interiors converted to several theatres), thus destroying the priceless architectural designs. This was done to be more competitive with the trend toward multi-screen complexes; the more screens, the better able to contract new films, and the more choice for the public. Smaller movie houses resulted in poor design, smaller screens, and poor sound.

There are some happy endings or more precisely, new beginnings to the story. Many of the old palaces have been reincarnated as homes for a variety of operations. Taking full advantages of the second chance, the proprietors of the restored theatres have thrown open the doors once again to amaze a new generation of spectators and to stir the memories of those who can still recall a time when movies cost a quarter and the theaters alone were worth the price of admission.

The restored 1929 Historic Hanford Fox Theatre, with its 889 seats downstairs, is the largest sloped-floor auditorium in Kings County. The balcony, originally with 350 seats, now has 142 plush rocking chairs and snacks, soft drinks, beer and wine (ages 21 and over) are served. It is appropriately named the Cabaret.

Operating a privately owned theatre is a labor of love, time and personal energy. Restoration is an ongoing process, and we enjoy sharing the experiences with others. We rent the theatre to private parties, schools, churches, hospitals, charities, business, industrial groups, unions, and governmental organizations alike. We have even been host to weddings in the picturesque auditorium. We are making progress, however we still have a way to go and need the support and concern of many.

The Fox Theatre has had quite a colorful background, steeped in American history. It has made a full circle from the 1920’s vaudeville silent film, early talkies throughout the prime years when movies were the center of entertainment. It has survived the transition of TV and the subsequent phase of multi-screens or other adaptive uses. An architectural treasure designed for multiple uses, hosting community and cultural events. Much more can be said about this Fox Theatre, which we leave for you to discover.

We hope you take the time to visit and attend performances and movies at the Historic Hanford Fox Theatre. We welcome your comments ideas and suggestions. Additionally, we look forward to providing you, the guest of the theatre with quality entertainment. Above all, we look forward to seeing and serving you at the theatre!

The Fox Hanford Theatre was closed by a partial ceiling collapse on March 20, 2014. It had reopened by December 2015.

The only major Skouras decor was in the lobby. Thankfully, the lobby was all that “got it” during the Skouras daze. I have seen a photo of the lobby circa 1950. The Humasons are to be commended for bringing the lobby back to the “feel” of its opening days. Unlike the Fox California in Salinas and Fox Bakersfield that had their original interiors chipped away for the “Skouras-ized For Showmanship” decor, the rest of the Hanford is thankfully intact.

There is more! In the last couple of years, the Humasons have uncovered much of the original tile and concrete work under the marquee, covered during the “Skouras-ized For Showmanship” era.
The effort and workmanship has done much to bring back some of the original look of the Hanford’s entrance.

The original pipe organ in the Hanford was assembled by Louis A. Maas using the 4-rank style B Wurlitzer from the original “Hanford Theatre” (nee T & D Theatre, opus 860, and three new ranks built in his own Los Angeles shop. The organ eventually ended up, severely cobbled, in a southeast Fresno Presbyterian church. The remains of the original Hanford Fox organ were donated to a local theatre organ society in the Fresno area.

lostmemory and ken mc: The pictures of the Fox under construction and after opening both depict the Visalia Fox Theatre in Visalia, Tulare County, not the Fox Hanford. They are quite similar in style, having been designed by the same architectural firm of Balch and Stanberry, but they differ a bit in details.

The various Spanish style theatres that Balch and Stanberry designed for Fox in that era were so much alike that it almost seems as though they had set up an assembly line to produce the plans. In fact, maybe they did. So many theatres were turned out by the firm in such a short time, their offices must have been full of busy draftsmen copying bits and pieces here and there.

There are a lot of great theaters in central Cali, some open, some closed. I used to go here when visitng my uncle and aunt back in the 70s-80s. They sure did a great job restoring it.

Lost: I found this link since I just finished reading a book that mentions Hanford CA and its theatre marquee. Very nice.

And according to the theatre’s website this one has a Mighty Wurlitzer!

Here is a photo of the Fox Theatre in Hanford taken October 5, 1936, by photographer G. Haven Bishop for the Southern California Edison Company.