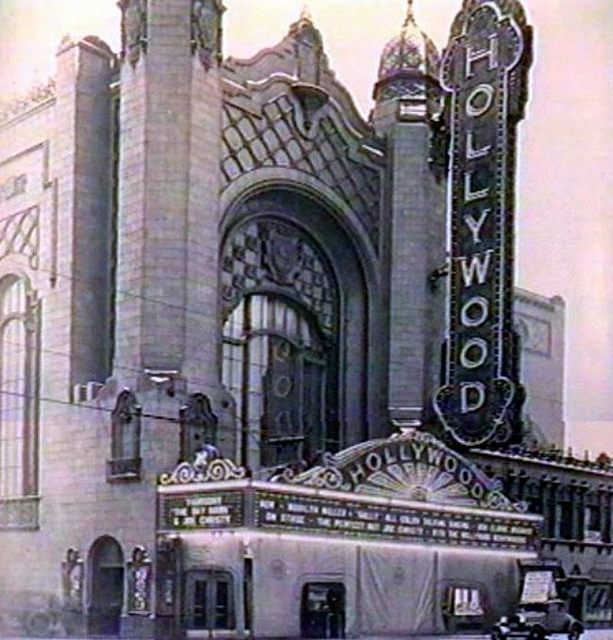 When it opened September 23, 1927, the Hollywood Theatre was Detroit’s second-largest theatre seating well over 3,400 patrons. It was built for the Cohen Brothers at a cost of over $2 million and was situated nearly a mile west of the long-established downtown entertainment district, Grand Circus Park.

The architect, Charles N. Agree, together with associate architects Graven & Mayger, designed this huge theatre in the Spanish Renaissance style complete with a large balcony, stage, and orchestra pit, as well as a Barton organ which was opened by organist Bob Clarke. Its lobby was 60 feet tall, and the entire interior was full of multi-colored marble, gilded plasterwork, and valuable artwork.

Its facade, with twin minaret-looking towers, soared over Fort Street, and it originally had a large vertical marquee. Its standard original marquee was intricately decorated with a rainbow colored neon-lit swirling pattern.

The Hollywood Theatre opened with the picture "Alias the Deacon", and for its first few years of operation, featured the Hollywood-Sunnybrook Orchestra, led by Sammy Diebert.

Due to its somewhat out of the way location, as well as its never jumping on the widescreen boom of the 1950’s, the Hollywood Theatre really never was very popular. It turned to a double-feature program in the 1940’s and 1950’s, in order to stay afloat, but this still made little difference. Its last two films were "The Flesh is Weak" and "Blonde Bondage" in 1958.

Sadly, this largely forgotten treasure was razed in 1963 to make way for a parking lot.

This link will take you to pictures of the Hollywood and some information too.

I was wrong in the figure I quoted for what Henry Przybylski paid for the Hollywood Barton—It was $3,151.51, still a stragetic sum. Hank’s son Michael corrected me.

Liz Goldwyn’s new book about burlesque mentions the Hollywood Theatre as the place where burlesque costume designer Rex Huntington got his start in the business as a chorus boy. The book includes backstage photos and ephemera of many of the theatres on the burlesque circuit. Great book! Amazing to see this fantastic theatre, and think about how it became a major burlesque house, and then vanished.

GWaterman—there is no evidence that the DETROIT Hollywood theatre ever became a burlesque house. It was a movie palace, its days in the sun were very brief due to the misfortune of its location, and it settled into life as a movie house quicker than its downtown rivals. We had Burley-Q theaters in Detroit, the Gayety being the most notable, but not the Hollywood.

A 1947 view of the Hollywood Theater in Detroit.

My father, Howard Denial, told me he managed this theatre. I suppose this would have been in the 1940s or 1950s. He would later manage the Wyandotte and Southland theatres. If anyone has any info on him at the Hollywood, I would be interested.

here’s a link to a nice detailed article about e history of the Hollewood Theatre – and two photos. (One interior!)

“finally beginning to digitize a massive pile of original 8 x 10 silver gelatin photographic prints of work done by the short-lived chicago architectural firm of graven and mayger (1927-28). i hope to have this project completed by the end of the month.

i’ve included a few images (interior and posterior) of detroit’s 3400-seat holywood theater completed in 1927. the theater was demolished in 1963 to make way for a parking lot."

chicago architects graven and mayger had apprenticed with noted theater architects c.w. rapp and g.l. rapp, whose chicago firm designed some 400 movie palaces across the country, starting in 1921 with the lavish french baroque chicago theater.

compared to rapp & rapp, the firm of graven & mayger was a flash in the pan. in a partnership spanning just 15 months in 1927-1928, the pair designed eight grand theaters across the country before finding their way to obscurity."