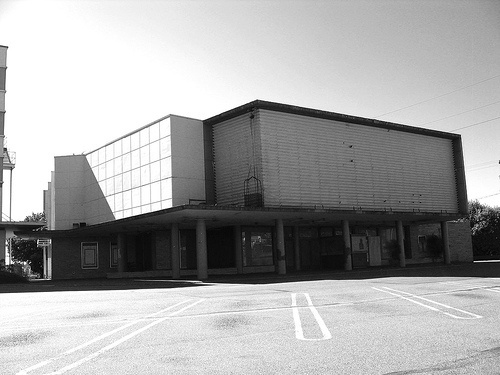 A very unique theatre in the Northgate Mall, originally called Northgate Center, which was located in what was at the time, although not now, was the rural north end of Seattle. Opened in 1950, the Northgate Center was one of the first, a place to go for everything in the burbs, including a grocery store. It was the first enclosed mall in the US. It was the first mall with public restrooms, and even had a four-story medical/dental building which joined the mall.

The Northgate Theatre opened on September 28, 1951 with Jeanne Crain in “Take Care of My Little Girl” and Sally Forrest in “Hard, Fast and Beautiful”. Seating was provide on a stadium plan, with a raised stepped section at the rear. The Northgate Theatre boasted Seattle’s largest staff of ushers and the country’s largest crying room. The interior was decorated by interior designer Anthony B. Heinsbergen in a Northwest Indian motif, and the theatre was the anchor of the Northgate Shopping Center which had 80 retail units.

The theatre was sold to Cineplex Odeon in 1987 and began its decline during the 1990’s under Loews Cineplex. By the end, broken seats, falling panelling, and ripped up carpet greeted what few patrons came out to support the old place.

Seattle’s Northgate Theatre, which is often regarded by some historians as the first shopping center movie house, went dark in 2002.

This theater has been officially demolished. It turned to rubble last week.

The Northgate Shopping Center originally had an Indian theme (the carved totem survives at the north entrance) and so did the Northgate Theater when it was new. The restrooms were labeled “Braves” and “Squaws.” Yes, definitely the 50s. The names were changed to “Ladies” and “Gentlemen” in more enlightened times.

The Danz Family Photograph Collection at the University of Washington lists a photo (the photo itself is not available online) from the preview for the grand opening of the Northgate Theatre. Among the people in the photo, according to its description at the UW web site, are the architect of the theater, John Graham, Jr., and the decorator, A.B. “Heinzberger” (clearly meant to read Heinsbergen.)

Boxoffice of September 22, 1951, also names John Graham as the architect of the Northgate Theatre. The original operator was Sterling Theatres.

An ad for RCA carpet (who knew that RCA made carpeting for theaters?) in Boxoffice of October 4, 1952, features a photo of the Northgate’s lobby. The Native American motifs used in the otherwise moderne theater are seen.

Note that it was John Graham Jr. who designed the Northgate Theatre. His father, John Graham Sr., was also a noted Seattle architect.

Was walking by Barnes & Noble the other day and was sort of struck by some intense nostalgia thinking about what used to be there. Very fond childhood memories. I just loved the place…

Northgate Theatre was very stylish. I would call it post art deco moderne. Rings of neon decorated the ceilings of the lobby and theatre itself and most corners were rounded. Many new theatre buildings are boxy and unattractive. This was graceful and unique. It will be missed. Piece of history gone for Seattle. And that very cool huge marquee.

They open on South side of Northgate Mall. Regal Theatre 14

Just something to add about the looks of the place. Almost 100% of lighting was neon. The picture posted does not do it justice. Swirls of neon starting outside the lobby and passing through small round holes in the floor to ceiling plate glass windows to continue their swirling pattern inside. Giant swirls of light green and soft white neon on the auditorium ceiling, hidden deep blue neon cove lights. Giant banks of autotransformer dimmers in the electrical room next to the projection booth for them. Until I worked here, I was unaware that neon could be operated on a dimmer circuit. Lighting for the huge marquee also 100% neon with the transformers next to the booth.

In the booth, when I first worked there were a pair of RCA (not Brenkert!) BX 100’s. The only ones I have ever seen. They were replaced about 1980 by a Century with a lens turret, a Cinemechanica Tower and an SRO Commander automation system. At that time, operation was combined with the Lake City Theater some 2.5 miles away. A projectionist was still on duty during operating hours but had a pager (pre cell phone days) and drove back and forth.