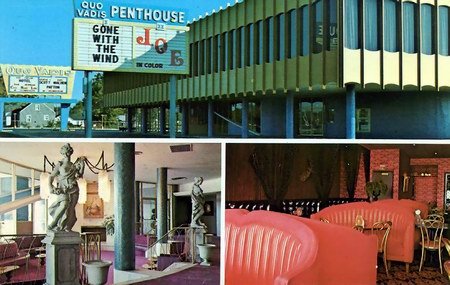 This unusual 1960’s-era movie palace, designed by the firm of Yamasaki and Associates, was built for the Wayne Amusement Company, opening June 22, 1966. Its steel-and-glass boxy shape was typical Modernist architecture, but inside, as its name might imply, it carried a Roman Empire theme.

In early-1968, two tiny auditoriums opened on the second floor, which had been originally designed as a sprawling restaurant. These were called the Penthouse 1 & 2. A small restaurant and bar was also opened upstairs.

An unusual feature was that while customers ate, they could wear headphones and view the movie on the screen of the nearby Algiers Drive-In through a large plate-glass window.

The Quo Vadis' owners announced in 1969 plans for a third story, which would house a "rooftop-garden" theater seating over 1,000 and featuring a beer garden. However, this was never actually built.

In 1970, the original main auditorium was twinned, seating about 540 each. Later in the 1970’s, one of these 540-seat auditoriums was itself twinned. The Over 21 restaurant was closed in the early-1980’s and converted into yet another auditorium.

In 1986, the Quo Vadis Entertainment Center, as it was by then renamed, was purchased by National Amusements, who continued to operate it as a multiplex.

It closed in January of 2002, with "Harry Potter", "Ali" and "Vanilla Sky" the last movies on its marquee.

Half of the seats were removed and are in use at another theater and church. The city proposed a Cultural Center, but nothing happened, and the theatre stood with a ‘for sale’ sign.

I hate to see any theater torn down, but this place was ugly,hope I do not offend anybody who loves this place.

you are right Chuck1231 if the building cannot be used for something else the property it is sitting on is worth a lot itself.

most of these links no longer work and one picture was deleted come on people if your gonna post links make sure it stays valid. Thank you national amusements for ruining another theater

Sadly preparation is under way to demolished this beautiful modern theater.

Sadly, the Quo Vadis is no more.

February 5th 1969 plan for the rooftop theatre with picture at

Sad to see the Quo Vadis gone. Grew up seeing many, many movies there. Raiders of the Lost Ark, Star Trek II and III, Beverly Hills Cop 2, the three original Star Wars films when they were re-released, just some that stick in my memory. Downstairs and in the Penthouse. Was a great movie theater.

Yosh Machida architectural sketch of the Quo Vadis Theatre for the Shafer Theatre Circuit in photos.