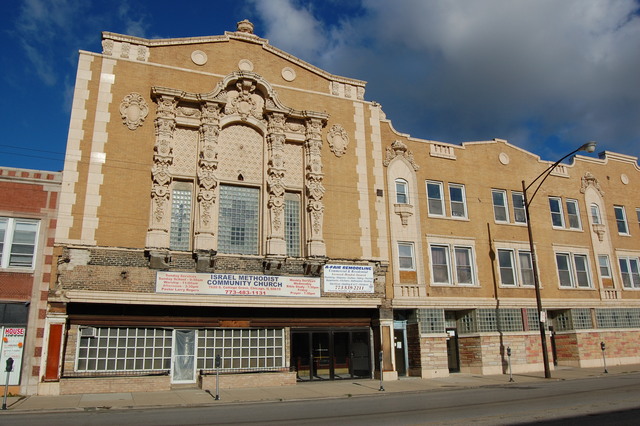 A large movie house in the Grand Crossing neighborhood, the Grove Theatre could seat over 1,800 and was opened by Lubliner & Trinz on May 12, 1926 with Rod LaRocque in “Bachelor Brides”.

Designed in the Spanish Baroque style, with an ornate terra-cotta facade, the Grove Theatre’s exterior is quite similar (on a smaller scale) in appearance to another W.W. Ahlschlager designed Chicago neighborhood theater, the Belmont Theatre in Lakeview, now demolished except for its facade.

Operated by Warner Brothers/Stanley-Warner during the 1930’s, 1940’s and into the mid-1950’s, the Grove Theatre was a first-run house for most of its existence.

After it closed as a movie theatre in the 1970’s, it later became home to a church.

This is now the Israel Methodist Community Church.

What a great photo,Thanks for posting.

Fantastic photo Bryan. That’s the first one I’ve ever seen of it before it was a church.

Wonder what the auditorium looks like now. Are we guessing that it probably looks like the central park with the balcony separated?

Clearer, larger version of the 1927 photo dded via Tim O'Neill.